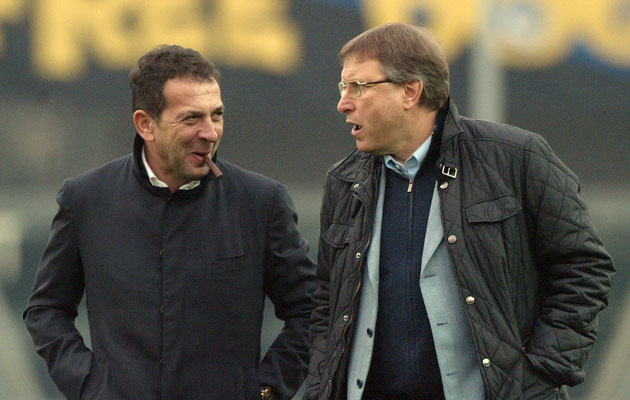 It would not be summer if Italian football was not up to its eyes in scandal. Yes, Italian football in the last week has been rocked (perhaps mildy shaken would be more appropriate) by yet another match-fixing scandal, this time involving Serie B side Catania.

On Monday of this week, Catania President Antonino Pulvirenti calmly admitted to state prosecutors that, yes, he had “fixed” five games during the last six weeks of the season just finished. Ironically, it had been Pulvirenti himself who had attracted the prosecutors’ attention when he had filed a complaint to police last March, claiming that various Catania fans had threatened him. From that point on, his phone calls came under surveillance, allowing investigators to make some depressingly familiar discoveries not about fan threats but rather about match fixes.

If some of the most recent scandals to hit Italian football have involved huge sums of money and international betting syndicates, this most recent Catania one is almost endearingly old-fashioned. Pulvirenti claims that he set about fixing the games not to make millions at the betting shop but rather to ensure that his Catania side avoided the drop to the Lega Pro (3rd) division.

Dodgy end of season Serie B games are nothing new. However, Mr. Pulvirenti went a bit further than most when setting in motion a match-fixing scam which saw his “agents” offer 10,000-20,000 euro to a small number of players on the opposing team in at least five games in April and May. Remarkably, Catania had a “wonderful” end of season run which saw them register four successive wins against Varese, Trapani, Latina and Ternana as well as a draw with Livorno. All five games are now the subject of the judicial investigation.

The scandal came to light last week when seven people, including Pulvirenti, were put under house arrest, with prosecutors revealing that another 12 people were under investigation. Intriguingly, this scandal has been called “The Train Goals” because throughout a series of tapped conversations, the protagonists consistently refer to trains as a code reference to particular players. If one man says “there will be a train at 4.00”, that is probably a refence to the number 4 (a defender, obviously) on the opposition team.

At another point in the wire taps, Gianluca Impellizzeri, a former player who now runs a betting shop, is heard to say: “They’re stupid, so stupid. If it hadn’t been for us and those five games… we were definitely relegated…”

Ironically, at the time, commentators had offered a variety of explanations for Catania’s sudden run of good form, including the appointment of a new physical fitness coach as well as the obvious overall quality of a side which in the last decade had played eight straight seasons in Serie A.

Mr. Pulvirenti is the classic “self-made” man, someone who has run supermarket chains and even his own airline company, “Wind Jet”, which employed 500 people but which collapsed in 2012. The Catania investigators argue that his “Train Goals” operation was a thoroughly “rounded” affair.

First players on the opposing team were contacted to ensure their vital “defensive errors”. Then, secure in the knowledge that Catania would win, the match-fixers gambled heavily on the Sicilian side, in the process collecting a series of winning bets which more than covered the original costs of their various bribes.

In this latter regard, it is worth pointing out that Federbet, the anti-match fixing organisation, had raised the alarm about some of the Catania games. In April, Federbet reported to police in Busto Arsizio, near Milan, that they had detected an “anomalous flow of money” on the Varese-Catania game of April 2, won 3-0 by Catania. By way of response,  Serie B officials dismissed the allegations as mere “gossip”.

Furthermore, in his evidence this week, Pulvirenti reportedly stated that his match-fixes cost 100,000 euro per game or half a million euro in all. For the time being, that figure does not match with the relatively modest sums of money paid out as bribes to the nine players from Varese, Livorno, Latina, Trapani and Ternana, currently under investigation.

However, now that Mr. Pulvirenti has chosen to “sing”, others may follow his example. Commentators argue that one of the reasons for Pulvirenti’s immediate admission of guilt is linked to the fact that under new Italian legislation, he could have been facing up to nine years in prison for “sports fraud”.

Given that this latest scandal involves Sicilian city, Catania, a town where the presence of “Cosa Nostra” makes itself felt, it remains to be seen if organised crime was involved. Likewise, it remains to be seen what involvement, if any, the Lazio president Claudio Lotito has had in the scam given that unconfirmed media reports claim that Pulvirenti had phoned Lotito looking for help.

Lotito, who is also the owner of Serie B side Salernitana, is currently under investigation for remarks allegedly made to Pino Iodice, director general of Lega Pro C side, Ischia last January. In a taped conversation, he suggested that promotion contenders Carpi and Frosinone (both in Serie A next season) “aren’t worth a damn”, adding that from the TV rights viewpoint, “it will be a disaster if they go up”.

On top of that, Italian football is still confronting a Catanzaro based enquiry which last month led to the arrests of 50 people allegedly involved in a lower divison betting scam. As if that were not enough, the state judiciary’s investigation into the Cremona based “Last Bet” scandal, which broke in 2011 and which revealed the involvement of Far Eastern, Balkan and Italian syndicates in widespread match-fixing in Italian football, is still trundling along and may yet cause problems for Italian national team coach Antonio Conte and for Lazio captain Stefano Mauri.

All of which prompted commentators on state radio programme “Radio Anch’Io” this week to suggest that, faced with all these scandals, Italian football should consider a total suspension of activity. Riccardo Cucchi, the authorative “voice” of state broadcaster RAI, spoke of his discomfort and embarrassment at commentating on incidents in games only to discover months or years later that perhaps that “goalkeeping error” or “defensive blunder” had not been an error or a blunder after all.

Asked to comment on the Catania scandal last week, Giovanni Malago, head of CONI, the overall governing body of Italian sport, said bitterly: “I’ve read the news reports but I don’t know anything. However, it is embarassing. It speaks for itself, it is simply a disgrace. For sure, there is no limit to how bad things can get.”