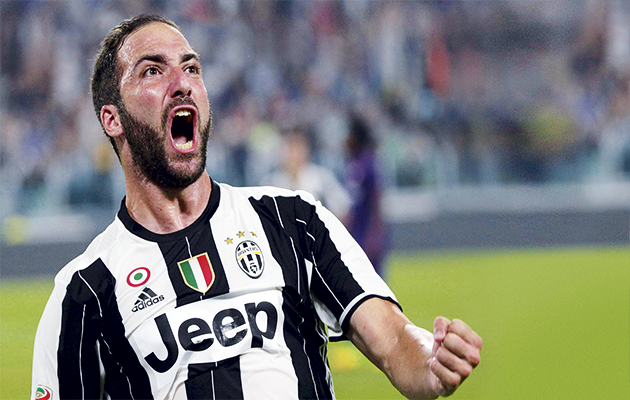 On the night of January 16 this year, seconds after the final whistle in Napoli’s 3-1 home win against Sassuolo, Argentinian ace Gonzalo Higuain ran over to the fans’ curva. As he stood there, basking in the heat of Neapolitan enthusiasm, he joined in the singing of one of the fans’ favourite songs, Un Giorno All Improvviso, Difendo La Citta, which is about defending the city of Naples.

This was a time when, for six consecutive January and February days, Napoli led Serie A. For many, Higuain’s singing of that song merely seemed to endorse what was becoming the most intense relationship that Napoli fans had had with any player since the days of Higuain’s compatriot, Diego Maradona.

Within a month, of course, Napoli had been knocked off the top of the table by Juventus, who went on to win their fifth consecutive title. All was not lost for Napoli, however, as they ended the season second in the table and qualified for the Champions League. The 28-year-old Higuain also wrote himself into the history books with 36 Serie A goals to equal the record set by Gino Rossetti in 1928–29.

Arguably the player of the year in Italy, he looked and sounded like a very happy camper. Speaking to Argentinian daily Ole after he had scored a final-day hat-trick against Frosinone that equalled the record, he said: “At Napoli, I really feel loved, more than in any other club I have played for.

“After scoring that third goal against Frosinone and being embraced by all my team-mates, I felt immensely happy.”

And yet, two months later, Higuain would join arch-rivals Juventus. 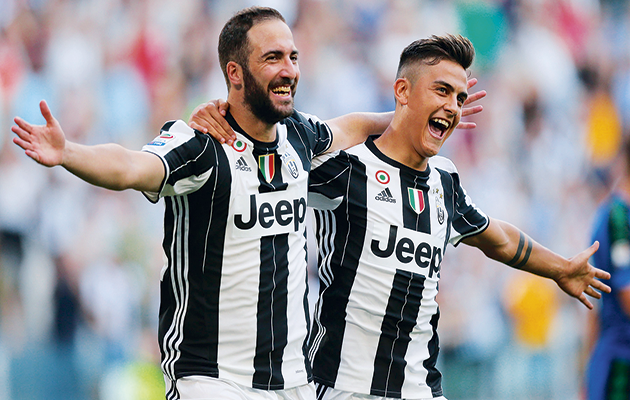 Throughout last season, he and his entourage had repeatedly said that he would not be leaving Napoli. Last November, his brother-agent, Nicolas, told tuttonapoli.net: “Gonzalo Higuain is not planning a future away from Napoli. The idea is to win something important [here]”. It was just one of many such denials.

In the end, the move to Juve went ahead via the mechanism of a €94million “rescission” clause in Higuain’s Napoli contract. Even if, to some extent, the player’s hand was clearly forced, Napoli fans saw the move as a betrayal. Sales of toilet paper bearing Higuain’s face did good business for some days in the street markets of Naples.

The Argentinian had touched so many deep-seated nerves. Above all, he had rekindled a feeling not seen since the Maradona days. It was not just that he had scored a record number of goals.

Nor was it that he had scored in six consecutive games, a feat last achieved by Maradona himself. Nor was it the fact that, under his inspiration, Napoli had found themselves back on top of the table for the first time in 25 years.

No, it was perhaps the sensation that, in the way Maradona was able to almost single-handedly guide Napoli’s fortunes all those years ago, Higuain was about to do the same thing. After all, this was the player who, in March 2014, had said that Napoli was the “perfect city” in which to play your football.

He appreciated the warmth of the fans and got on well with both of his Napoli coaches: Rafa Benitez in his first two years and then Maurizio Sarri last year. More than once, he pointed out how being able to play with continuity – unlike at Real Madrid, where he was in and out of the team – was ideal. This was a marriage made, if not in heaven, certainly on the drawing board of some smart agent. When the union broke up, however, Napoli fans felt bitterly betrayed.

“From a human point of view, the Argentinian has disappointed us,” argued the areanapoli.it fan site, adding: “It is fair enough to be ambitious and want to win something after you have just finished second in the league and after you have lost two Copa America finals on penalties and above all lost the last World Cup Final.

“But why did he reassure Neapolitans this summer, telling them not to worry? 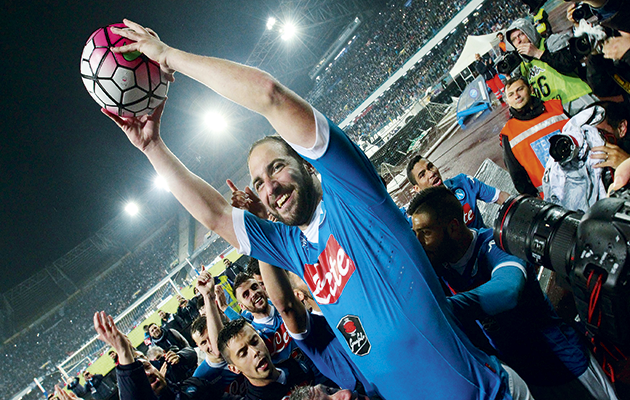 Record…celebrating his hat-trick against Frosinone in the final game of last season.

Even if the Neapolitan fans were clearly not happy, there were other parties who did well out of this deal. Take the opinion of super-agent Mino Raiola, who looks after Zlatan Ibrahimovic and Mario Balotelli, among others. He told La Gazzetta dello Sport: “The sale of Higuain was brilliant. I would have sold him for a lot less. It is always a lot better to sell a player and have your regrets than to not sell a player and have your regrets.”

Former Italy midfielder Giancarlo Marocchi, who is now a pundit with Sky Italia, says there was nothing hypocritical about Higuain’s profession of attachment to Napoli, explaining: “Higuain did absolutely nothing wrong. At Napoli, he had done as much as you could have asked him to do. To do better than 36 goals in a season would be impossible. It is normal that a player like him heads off, looking for other stimulation.

“Nowadays, so many players are managed by fathers, brothers, friends…these people have a different view of things, they’re not in the dressing room, they are not out there on the pitch. For them the relationship with the fans has little value. However, for the player, it has a great value. So when a player says he does not want to leave, it is often because he genuinely feels good at a particular club and would be happy to stay.”

For the time being, Higuain does not appear to be doing much wrong in Turin either, scoring four goals in his first five Serie A games. And it did not go unnoticed that he asked Argentina’s new national coach, Edgar Bauza, not to call him up for the World Cup qualifier against Uruguay at the beginning of September.

Preferring to stay in Turin to work on his fitness, the impression he has made on his new team environment so far fits in with previous impressions made at Real Madrid and Napoli. He comes across as an utterly serious professional who, if he has a fault, it is that he often seems too modest and quiet in the dressing room, rarely making team-mates feel the weight of his huge contribution – at least in the case of Napoli – to the team cause.

During training with Juve he has amused the staff by emulating his Italy-based compatriot Pope Francis in looking for a drink of mate or yerba mate, the traditional South American caffeine-rich infused drink. Yerba mate is particularly popular in Argentina where it is called the “national infusion”, so Argentinian pilgrims to the Vatican often bring along the drink to offer to the Pope as he does his rounds during his Wednesday public audience.

Higuain’s integration at Juventus has gone smoothly, not only because of his own uncomplicated attitude but also, of course, because he has gone to a team where one of the undoubted stars is his compatriot and strike partner Paulo Dybala.

The pair, who seem set for an important partnership up front, live close to one another in central Turin and even share a private box for family and friends at the Juventus Stadium.

In an interview with La Gazzetta dello Sport’s Sport Week magazine in January 2014, Higuain gave a rare insight into his vision of the world, admitting to his highly privileged status but adding that he often yearned for normality, revealing: “The fact that I am a footballer does not make me any different from the office employee, the artisan worker or the businessman. Yes, I can permit myself luxuries denied to others but that’s the law of life. On the other hand, the majority of people can walk around the streets without everyone looking at them, and they do not have to justify themselves if they don’t want to stop to pose for a selfie.

“Before getting to this point, I had it hard enough. I was only a young boy when I had to leave home, family and friends. I am a normal person who likes doing normal things, something which is not always possible.”

In that same interview, he spoke of his football origins and vision, saying: “As a child, I played a lot in the street, to the approval of my [ex-footballer] father. He would tell me: ‘Move this way, move that way, that’s the thing that really gives a defender bother’. I started off playing in attack and given the results, I stayed there.

“Lots of fans think that I am only interested in scoring goals but that’s not true, I really like to lay on a good pass and create space for team-mates.”

Born in France, to professional footballer Jorge Higuain and painter Nancy Zacarias in December 1987, his arrival came during the one year that his father played football outside of Argentina, namely for Brest. At the end of that season, the family returned to Argentina, where Gonzalo was reared.

When he was coach of France, Raymond Domenech twice – in 2006 and 2008 – tried to persuade Higuain to play for Les Bleus. However, playing for River Plate at the time, he declined the offer and subsequently obtained an Argentinian passport. To this day, he retains French and Argentinian dual citizenship.

A key figure in the early years of Higuain’s career was the River Plate and Argentina coach Daniel Passarella, an old colleague of his father. As an 11-year-old, the youngster had accompanied Higuain senior on a scouting trip to France on behalf of Passarella, who at the time was Argentina’s national coach. 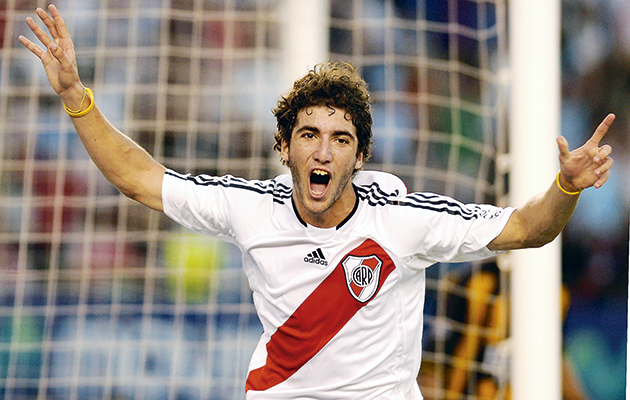 National interest…Higuain was twice approached to represent France during his early career in Argentina with River Plate.

Later it was Passarella, during his second stint in charge of River Plate, who gave Higuain an important break, establishing him as first-team regular. He had joined River at the age of 10 from Buenos Aires local team, Atletico Palermo, making his River debut in May 2005.

Good performances in 2006, including a Libertadores Cup double against Brazilian side Corinthians, inevitably attracted attention on the other side of the Atlantic. In December 2006, on the advice of then-coach Fabio Capello, Real Madrid bought Higuain for €12m.

With three Spanish league titles, 190 league games and 107 league goals in his six seasons with Real, it would be hard to argue that Higuain was a failure at Madrid. Yet for much of his time in the Spanish capital he was under pressure (in different seasons) from the likes of Ruud Van Nistelrooy, Raul, Karim Benzema and Cristiano Ronaldo for his team place. Coaches such as Bernd Schuster and then later Jose Mourinho had their doubts about where best to play him even if, when he lined up alongside Benzema and Ronaldo in the 2011-12 season, he formed part of a prolific attack that scored 118 goals, scoring 22 Liga goals himself.

In the end, the desire for continuity got the better of Higuain and Real let him go to Napoli for €40m in July 2013. Not only have Real never really voiced any sense of regret about his departure for Italy but many Spanish football commentators wonder if he really was worth the current €90m price tag. But anyone who watched Higuain in action in Italy last season would not have been surprised by Juventus’ readiness to spend the money they got from selling Paul Pogba on Higuain.

Clearly, Juve have bought Higuain to not only score lots of goals in Serie A, but also to score important ones in the Champions League. And that will be the biggest challenge of his career so far.