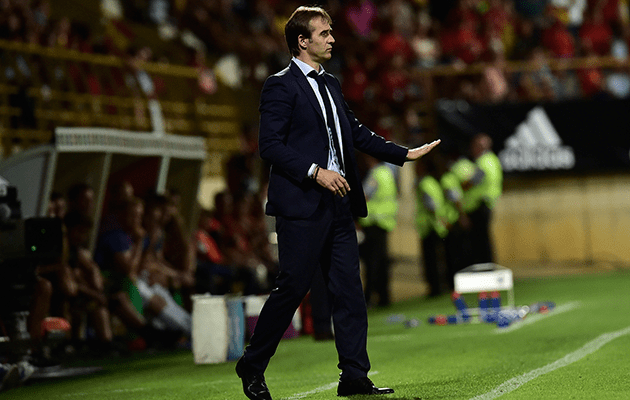 International week in Spain, and that can mean just one thing. Yes, transfer rumours. Names, names, and more names. And not very much about Spain. Just look at the sports dailies.

On Tuesday, Marca’s front page was dedicated to Real Madrid’s interest in Yuri and Aarón, while El Mundo Deportivo led on Dybala and Griezmann. Sport were clinging to the hope that Leo Messi would renew with Barça and AS had gone for the news that lots of people want to go to Madrid vs Bayern Munich.

On Wednesday, AS’s cover declared: “Fascinated by Mbappé”. Marca was looking his way too. And Sport reckoned “Bellerín opens the door to Barça” while Mundo Deportivo was looking at the candidates to be Barcelona manager. By the next day they were leading on Isco – yes, Real Madrid’s Isco – going to Barcelona, and Sport were suggesting that Mahrez was off in the same direction. AS’s cover was an interview with Diego Simeone and Marca were going on about Fernando Alonso’s car.

Friday came, match day, but the match was nowhere. Well, not nowhere, exactly, but not exactly centre stage either. Mbappé was on the front of Marca, Coutinho was on the front of Sport – I’d sign him, Neymar says – and Dybala was on the front of El Mundo Deportivo. Spain versus Israel did turn up on AS, mind you. A game marked by the yellow cards, they noted: five players on the verge of a suspension.

Hold back, then? No, not exactly. It’s a game that matters. More than what’s coming next.

Just like last time, Spain have a home qualifier against a less glamorous side in a smaller provincial stadium – Macedonia in Granada before, Israel in Gijón now – followed by a friendly away against a historic footballing nation in one of Europe’s best stadiums. Back then it was Wembley, this time it’s the Stade de France. Both times, Julen Lopetegui was at pains to remind everyone, players included, that it’s what comes first that, well, comes first. “This is the steak,” he said.

Spain have never lost a World Cup qualifier at home. And never really does mean never. So maybe it’s natural that focus is thrown forward – when it’s on the national team at all – and that it all feels like a bit of a foregone conclusion. Especially when it’s against Israel, whose politics have occupied pages more than their play over this week, after a local government decision in Gijon to boycott Israeli goods and with graffiti appearing locally that supports Palestine.

But the nature of the qualification structure and the group they’re in means that it’s not just about avoiding defeat; the feeling in the camp is that they must win. Only one team goes through to Russia and Italy and Spain have been drawn together. Both countries are working on the assumption that the other will win every game; each match is not so much an opportunity as an obligation. Theirs is a challenge to get every other point and then face off against each other. A draw in Italy means that the game in Spain will be decisive…but only if they win games like these.

So games like these have to be taken seriously, approached properly, competitively. A squad marked by the continuing shift towards a new era, in which the manager has turned to men he knew when he worked with Spain’s U21s and U19s level, in which Deulofeu and Illaramendi were the surprise call ups, but in which the starting XI will still have a reasonably familiar look, needs to win to make it to Russia. That at least is what their manager tells them. Forget France, this is the match. One to be won with the same arms Spain have employed for years, and little something extra.

As for everyone else, it would be nice if they were aware.