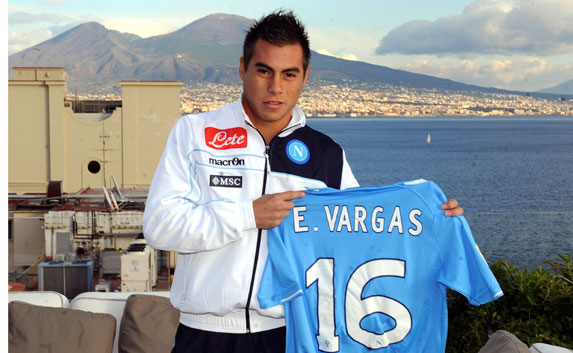 As the competition’s top scorer, Eduardo Vargas’ ten goals helped Universidad de Chile win the Sudamericana Cup, earned him the label “the new Alexis Sanchez” and secured a move to Serie A with Napoli.

Like Sanchez, he started his professional career with Club de Deportes Cobreloa of Calama, in the dusty, desert environment
of the north of the country, but there are appreciable differences between Vargas and the Barcelona wide man.

While Sanchez was a local boy, from nearby Tocopilla, Vargas comes from the capital Santiago, hundreds of miles to the south. Having trained with two clubs from his home city, Universidad Catolica and Palestino, it was his appearance in a 2005 football-based reality-TV show that brought him to Cobreloa’s attention and earned him a contract.

He made his debut in 2006 and showed steady progress over the next three years, which he then kept up after moving back south to join Universidad de Chile at the start of 2010.

A useful option during his first season – in a counter-attacking La U side that became the first Chilean semi-finalists in the Libertadores Cup since 1997 –Vargas has since blossomed under the bolder approach of latest coach Jorge Sampaoli.

Quick, incisive, cunning and carrying a threat in either foot, Vargas has been carving open defences and wreaking havoc on a weekly basis. And after La U won the 2011 apertura title, Chile’s top-flight captains named him player of the tournament,
with Deportes La Serena skipper Mauricio Salazar explaining: “He was the key man because his speed opened up the flanks, he set goals up and scored them as well.”

Europe clearly beckoned for Vargas and the only debate would seem to be whether he moved in the January transfer window or stayed for the forthcoming Libertadores campaign before his club cash in during the summer. In the end, Napoli agreed a fee with Universidad for £11.5 million, and Vargas made his debut in January 2012

Before his move to Serie A,Villarreal headed the list of interested parties after they had a glimpse of the Vargas threat when Spain’s national team met Chile in a friendly in Switzerland, in September, as he slipped behind the Spanish defensive line to beat Iker Casillas with aplomb and score his first international goal. His second followed a month later against Peru in a World Cup qualifier.

His last international outing was in November’s World Cup clash with Paraguay, when he and Sanchez – who missed the start of the Brazil 2014 campaign through injury – filled the flank roles in a comfortable 2-0 win to provide evidence that, even after Bielsa’s departure for Athletic Bilbao, Chile’s national side still stand out for their use of quick and skilful strikers cutting in from wide spaces.

This article originally appeared in the January 2011 issue of World Soccer.