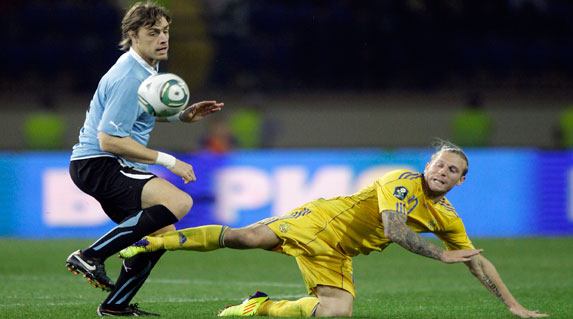 Chosen as the young player of the tournament at this summer’s Copa America, young centre-half Sebastian Coates is proof that Uruguay’s triumph in Argentina, like their run to last year’s World Cup semi-finals, is part of a much larger masterplan – a process overseen by boss Oscar Tabarez.

“The coach is also an educator,” claims Tabarez, who is nicknamed El Maestro for his teaching qualifications. The lesson he has been trying to put across is that in a globalised football world it is impossible for Uruguay to hold on to its best players. The national youth sides must therefore identify and groom promising youngsters, and give them a crash course in their country’s footballing identity and forge an affinity with the sky blue shirt.

Coates is a product of that process. Playing in the youth sides of Montevideo giants Nacional from the age of 11, he was identified as one for the future by Tabarez and represented Uruguay at Under-17 level before becoming a part of the hugely talented Under-20 squad of 2009.

In a line-up that also included Abel Hernandez and playmaker Nicolas Lodeiro – both of whom have made it to the senior squad – he may not have been the most eye-catching in that side, but he has now established himself as the graduate to make the quickest impact with the seniors.

Much of this can be put down to the solid experience he has been picking up at club level. At the start of 2009 he was one of three useful Uruguay centre-backs – along with Martin Silva and Robert Herrera – in the South American Under-20 Championship, and when he went back to Nacional he was handed his club debut. After making an immediate impact for his club, he was thrown into the deep end as they became the first Uruguayan team to reach the Libertadores semi-finals in 20 years.

That run ended with defeat to eventual champions Estudiantes of Argentina, and in the second leg Coates was at fault, caught in possession in the build-up to a vital goal. But, as Tabarez would surely say, mistakes are part of a player’s learning process.

Coates has now been battle hardened by the experience of three Libertadores campaigns and, without being a big shouter, he has shown leadership potential, taking responsibility for those around him, keeping things simple on the ground and using all of his 6ft 5in frame to cut a commanding aerial presence in both penalty areas.

He made his senior Uruguay debut on the eve of the Copa, appearing for the final half-hour in a warm-up match against Estonia. He may well have thought that he was going to Argentina merely to pick up experience, but with Diego Godin unfit and Mauricio Victorino not 100 per cent, he got the nod over Andres Scotti to partner Diego Lugano at the heart of the defence from the second game on.

He had a piece of luck in his first few minutes when an attempted clearance struck Chile’s Mauricio Isla and looped over Uruguay’s goalkeeper only to come back off the bar. But after that let off, he was tough, decisive and sure of himself.

He missed the epic quarter-final against Argentina, but was re-instated for the semi against Peru alongside Lugano, the man he may one day replace as Uruguay captain.

Coates has even been dubbed Luganito (little Lugano) and Brazil’s Sao Paulo, the club where Lugano made his name, were following him until Liverpool swopped to sign the youngster.