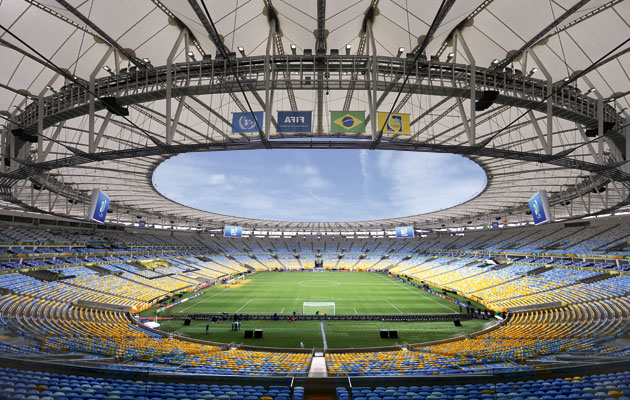 Rio de Janeiro’s teams have a big problem this year. The city’s two main stadiums, the Maracana and the Engenhao (or Nilton Santos) have been handed over to the IOC for this year’s Olympics, and will not be available to stage matches until the end of October.

Meanwhile, the city of Sao Paulo has the opposite problem. With Corinthians having moved into their new ground, built for the World Cup, the splendid, well located Pacaembu stadium is under-used.

And so on Sunday it played host to the Flamengo versus Fluminense derby, the Rio teams bringing their historic rivalry some 220 miles southwards.

The Fla-Flu is probably Rio’s most glamorous derby. But it cannot claim to be the biggest. Because if Flamengo are the most popular club, then Vasco da Gama are in second place. Indeed, the Fla-Vasco clash is known as ‘the derby of the multitudes.’ Even so, the Fla-Flu has a grip on the imagination. The country’s current political polarisation, for example, is often referred to as a Fla-Flu divide.

Part of this may be down to the pleasing phonetics. But the appeal of the Fla-Flu has much to do with the way that football was popularised in Brazil, the form that myths were invented and traditions created.

Flamengo were a rowing club, who took up football as a result of a split in the ranks of Fluminense, where a group of discontented players broke away and searched for another club to represent. This brother-against-brother division was repeated by a pair of Brazil’s most influential writers. Nelson Rodrigues is the country’s most renowned playwright. He was also a Fluminense fan. His brother, more obscure now but more famous at the time, was Mario Filho, who bears the official name of the Maracana. Mario Filho was a Flamengo supporter. The two brothers talked up and mythologised the rivalry with rich phrases (“The Fla-Flu started 40 minutes before nothing,” wrote Nelson Rodrigues.)

A key moment came in December 1936. A new development had caused a rupture. Flamengo and Fluminense had embraced professionalism. The other major clubs, Vasco and Botafogo, remained amateur. Mario Filho had recently acquired the ‘Jornal dos Sports’ newspaper, and would use as a vehicle to change the country’s sporting culture. A newly professionalised sport would need a mass market of fans, beyond the clubs’ members, who tended to be wealthy.

In December 1936 there were three Fla-Flus. Filho used them to promote a competition between the fans, to see who could best encourage their team. In the pages of his paper he wrote that “we are trying to introduce into Brazil what happens in the United States” – presumably a reference to baseball culture.
The three matches did indeed attract a new kind of public creating a new kind of atmosphere – passionate and involved fans rather than genteel spectators. Filho celebrated that “football in Brazil has taken the first steps towards an ‘americanisation’ of the fans which should now organise itself definitely as a preponderant factor.”

On Sunday, though, there was little to enthuse the crowd of over 30,000 who went along to Pacaembu. Flamengo and Fluminense had played out a goalless draw in the same venue almost exactly 74 years ago, when the stadium was newly inaugurated. That day, though, they had an excuse. Torrential rain made playing conditions very difficult. Sunday, however, was a lovely late summer’s afternoon – and the match, a dreadfully dull 0-0 draw, was not worthy of its setting. This latest visit to Sao Paulo added little or no lustre to the history of Brazil’s most famous derby.