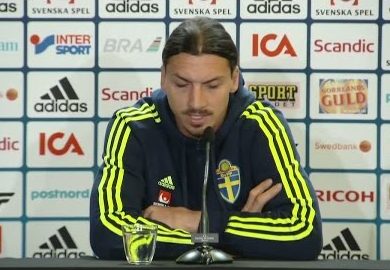 Swedish superstar Zlatan Ibrahimovic is growing tired of the furore regarding his future and said that he looks forward to reading who is making up the best story.

The Swede said last week that he had already decided where he would be plying his trade next season, with a move to Manchester Utd and a reunion with Jose Mourinho being touted.

He also has a lucrative offer from China too; however his outspoken agent, Mino Raiola contradicted the Swede and said nothing has been decided yet.

“I want to still write a lot of stories,” Ibrahimovic said.

“I get excited when I see them because I want to see who is making up the best story.

The Swede ruled out a return back to his native land in typical Ibrahimovic fashion.

Ibrahimovic also had faith in the security measures being put in place ahead of Euro 2016.

“After the tragic events in Paris [last November], the security has been heightened considerably, you see military guys on the street,” he said.

“Ahead of this championship I know that they have stepped it up a lot. One doesn’t want something to happen. I believe the security will be in place.

“I hope that the people can enjoy the football, the players can enjoy playing football, and even those sitting at home – let them enjoy it. I hope it will be a pleasure.”