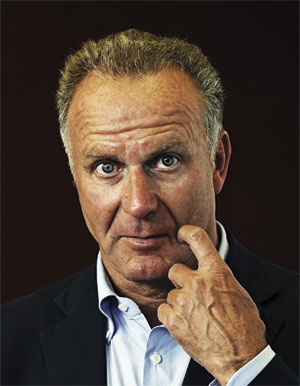 World Soccer: As president of the European Club Association (ECA), how would you describe the working relationship with your counterparts at FIFA and UEFA?

Karl-Heinze Rummenigge: We’ve had our good times and our bad times. When the ECA was first set up in 2008 the relationship was a productive one. But, I have to say, for the last six months it’s not been so good. Currently there are no discussions on the renewal of the present agreement, which runs out in mid-2014, and we don’t seem to be making particular headway regarding our aims: the need for more democracy and transparency in football’s decision-making process at the highest level; a redrawn international calendar; universal insurance cover for players on international duty; and clubs receiving proper compensation when their players are called up for national teams. It’s getting to the point where I’m not especially optimistic about reaching an acceptable agreement.

You have spoken about the possibility of clubs boycotting the Champions League. Is that a real prospect?

We’ve often discussed how we would proceed if we could not come to an agreement with the football authorities, and we are unanimous as to what our next move should be. If we don’t settle a new memorandum with FIFA and UEFA by Christmas of 2011, I will have to ask our board and general assembly whether they are ready to go their own way, to organise our own competition. I feel FIFA and UEFA are underestimating the clubs. They need us more than we need them. Without the players – our employees – the governing bodies could do nothing. We could run the Champions League without them.

How big a sticking point are your demands for adequate compensation for players’ release to national teams?

A couple of weeks ago I really did have the feeling we were close to a deal on this. We’d agreed total compensation for Euro 2012 of ¤55million, but when you realise that is only 3.5 per cent of UEFA’s European Championship income it’s obvious we are talking about relatively small amounts of money. As far as we are concerned the ¤55m was only the first step and we made it clear we needed more. However, a couple of days ago I heard that our latest request for compensation had been labelled excessive. I said to myself: “OK, I got your message.”

What is your biggest bone of contention with the governing bodies?

Without doubt the international calendar. Look at how it’s evolving. From cycle to cycle [every four years], there is a substantial increase in games. Eight years ago we had 40 games in that time frame, now it’s up to 46. We gave up the second group-phase of the Champions League because we believed that it would be good for our players to have more rest. But what happened? The national teams took up those dates and the players have more on their plate than ever. That cannot be fair by any stretch of the imagination. We’re not fighting a battle here for the clubs or the leagues but for the players. They need more rest, more time to regenerate.

So August and June fixtures must go?

Of course. The games in August are an absolute nonsense. In many countries
the domestic championship has barely started or not got under way at all. I’m not happy with June either. I’d like to see the Champions League Final as the last fixture of the campaign. Let the players have their holidays. Give club coaches the necessary time to prepare for a long and hard season. By eating away into the summer months we make his job very difficult. Sometimes I’m astonished at how the authorities react to our concerns. UEFA president Michel Platini, who played at the very highest level, looks at me as if I’m crazy when I raise these issues. I’m not crazy. All we want is more common sense. There has to be pre-qualification for World Cups and European Championships. If we can have it in the Champions League, why not in international football too? The counter-argument is that the likes of San Marino and Malta have the right to play the big nations. But in truth there is only one reason for this – money.

Should the national federations demand the cleaning up of FIFA?

I believe only two – England and Germany – are really critical of FIFA. It should be up to the federations to clean up the business, to root out the corruption. The normal thing would be to push for transparent and democratic decision-making, to ask for all relevant stakeholders – players, clubs, leagues, federations and referees – to be involved. But I have the impression that the federations only seek to protect FIFA. The policies of FIFA and UEFA are made to measure to suit the federations.

Do Sepp Blatter’s proposals for the reform of FIFA go far enough for you?

The current image of football is a big problem for the whole football family. There have been far too many stories of corruption and clearly the system has to change in a very tangible way. Now that Mr Blatter has established all these “task forces” it’s only right I give them a fair chance to sort out the existing problems. I’m very curious to see how this pans out. Then we will see how serious FIFA, and especially Mr Blatter, is about this matter. It is clear he is under a lot of pressure to put his house in order. He is being watched very closely by the football family and the entire world. The system has looked very dirty, so it’s up to him to act to put it right.