Despite Saturday’s 1-0 victory over Holland, several Danish players have admitted that they were lucky to have emerged with a clean sheet.

Defender Simon Poulsen said that while the Danes were delighted with the result, they realise that they will have to re-focus for Wednesday’s game against Portugal.

“Portugal will be a different kind of opponent,” he said. “There are always good things we can focus on and there are some aspects of our play we can improve on.”

His sentiments were echoed by midfielder Niki Zimling, who impressed in central midfield against the Dutch.

“There were times when they were given too much space,” he told reporters. “We need to work on this to ensure it doesn’t happen in the future.”

Meanwhile coach Morten Olsen, who copped a huge amount of flak following his decision to ban the players from Tweeting during the tournament, said his player trusted their instincts.

“Football is not only about the first 20 minutes, it is about 90 minutes and more,” the Denmark coach said. “We said we had to reach a high level to win a match in this group and that is what happened. The Dutch had some chances but so did we. We trusted our own way of playing football. It was important to do that, to show why we had qualified for this tournament.”

For Holland, this was a traumatic start to the tournament, made worse by the knowledge that old foes Germany lie in wait in their next game.

The Dutch are never slow in coming forward when it comes to finding a scapegoat and yesterday was no exception.

Playmaker Wesley Sneijder, who set up a host of chances, exempted himself from criticism, and pointed the finger at misfiring forwards, Arjen Robben, Robin Van Persie and Klaas-Jan Huntelaar.

“We lacked sharpness and a cutting edge in the final action,” he said.

“The forwards really wanted to score – they should have done. We gave them enough chances for that. My job is to give them good balls. I think I did that. We should have scored.”

Robben, who squandered a couple of great opportunities in the first half, blamed one of his misses on the Dutch public. Now that’s chutzpah!

“For the first one, instead of shooting myself, I tried to find a team-mate. I should have taken the chance on my own,” he said.

“But people in the Netherlands say I’m a selfish player so much that it must have had a subconscious impact in my head. I wanted to be too collective. It was a mistake.”

He won’t be making that mistake again any time soon.

Van Persie, who missed a number of chances in the defeat, was singled out for criticism. But coach Bert Van Marwijk came to the defence of the Arsenal man.

“It was not only Van Persie who missed chances, it’s not about one player,” he said.

“Four, five or six other players missed chances too, plus the referee had a chance to give us a penalty and didn’t. The ball just didn’t want to go in. We were better than our opponents but you still have to score that goal and when there’s a penalty that doesn’t go in your favour there’s nothing you can do.”

UEFA have charged the Russian football association on Saturday after fans were filmed fighting with stadium stewards after a European Championship match. The incident took place after Russia’s opening game against the Czech Republic and footage of the stewards being attacked by gangs of fans have circulated widely on the internet.

UEFA also is looking for more evidence amid reports of ”alleged abuse directed at Czech Republic players” during Russia’s 4-1 win in Wroclaw.

”UEFA has opened disciplinary proceedings against the Football Union of Russia for the improper conduct of its supporters,” it said in a statement.

Czech defender Theodor Gebre Selassie, the only black player on the pitch, was allegedly racially abused by Russian fans during the game.

Best banner of the day

Hard not to smile at this banner carried by a group of Ireland fans en route to Poland. 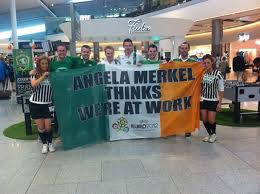 Worst banner of the day

Monitors from the Football Against Racism in Europe (FARE) fans’ group reported to UEFA that Russia fans  displayed a nationalist ”Russian Empire” flag.

FARE executive director Piara Powar, who will have certainly earned a long, relaxing break after this tournament, so frequently is he being called upon to discuss race-related issues, told The Associated Press,  that the symbol was one ”we take as evidence of far-right sensibilities.”

A Russia team spokesman, Nikolai Komarov, told the Associated Press in a telephone interview: ”The federation has many fans. You don’t have control over them all.”

In a separate incident in  Wroclaw, four Russians were detained for questioning for allegedly beating up a fellow Russian, who was hospitalized,  police spokesman, Krzysztof Zaporowski, said.

It’s difficult to know who the most overworked people in Poland are right now: the police, Powar, or the PR man for the Russian team.

It will get worse before it gets better: on Tuesday, hosts Poland ‘entertain’ Russia.  It’s a Russian national holiday and fans plan to march from the city centre to the stadium.

What could possibly go wrong?

Mario Gomez may not be the most clinical finisher in world football but sometimes, as Napoleon once said, ‘Victory belongs to the most persevering’ and for all his faults, Gomez never gives up. Here the Germany  striker rises above the Portuguese defence and indeed the mediocrity of his own performance, to head the only goal of the game.

Hardly a classic Goal of the Day, and to compensate for its questionable standard, here’s a blinder from Lionel Messi in   Argentina’s 4-3 friendly win over Brazil on Saturday.

Feed Ronaldo and he will score…eventually

Ronaldo, like Van Persie, was criticised for not reproducing his club form on the international stage, and the Real Madrid striker cut a forlorn figure during Portugals’s 1-0 defeat to Germany on Saturday, as he was reduced to a number of speculative long range shots.

Luis Figo, Portugal’s most capped player, believes the solution for Portugal’s goalscoring problems is to let Ronaldo have more shots on goal.

“I think the team need to give him the chances to have a good performance,” former World Player of the Year Figo, 39, said.

“Cristiano’s style is to finish, to score, so if the team don’t produce those kind of opportunities then of course his performance is down.”

By the law of averages he will eventually score, but so too would an infinite number of monkeys.

Polish police say they have arrested 14 football fans involved in a brawl that broke out overnight ahead of the European Championship match between Ireland and Croatia.

Ten Poles, three Irish and one Croat were arrested after a fight broke out at 1am in the morning.  Sounds to me like a quiet night out in Dublin.

Women in Iran are  banned from watching live public screenings of Euro 2012 games because of an “inappropriate” environment where men could become rowdy, a deputy police commander has confirmed to the ISNA news agency .

“It is an inappropriate situation when men and women watch football in (movie) theatres together,”  Bahman Kargar, Iran’s deputy police commander in charge of social affairs, told ISNA.

“Men, while watching football, get excited and sometimes utter vulgar curses or tell dirty jokes,” he said. “It is not within the dignity of women to watch football with men. Women should thank the police for the ban.”

How thoughtful of them. The possibility that men could moderate their behaviour in front of women, does not seem to have crossed anyone’s mind.

England’s Ashley Young explains how he had the last laugh after he was racially abused as a youngster.