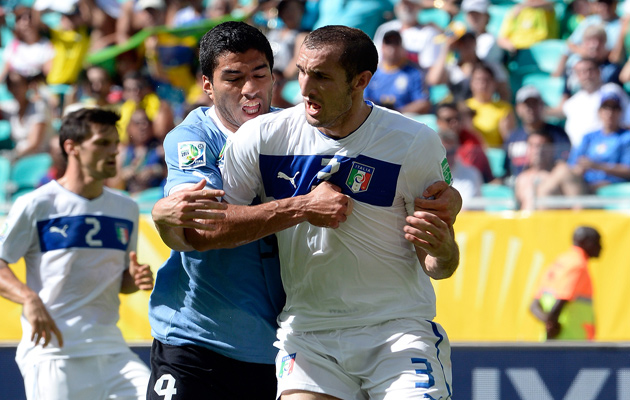 The photo was taken during last year’s Confederations Cup meeting between the two sides and appears to show Suarez poised to sink his teeth into Chiellini’s shoulder. Was this a dry run by football’s very own Count Dracula? Was he lining up his next victim?

Chiellini was fuming after the incident. Andvwho can really blame him?

“It was ridiculous not to send Suárez off,” he said. “It is clear-cut. Then there was the obvious dive afterwards because he knew very well that he did something that he shouldn’t have done.

“Suárez is a sneak and he gets away with it because FIFA want their stars to play in the World Cup. I’d love to see if they have the courage to use video evidence against him. The referee saw the bite mark, too, but he did nothing about it.”

With depressing predictability, Uruguay leapt to Suárez’s defence, with the team captain Diego Lugano accusing Chiellini of making a meal (sorry) out of the incident. He also suggested that what looked like a bite mark was in fact an existing scar.

If it’s possible for anyone to come out of this incident looking worse than Suarez, then Lugano must be a strong contender.

“Did you see it [the bite] today or did you see what happened in other years?” Lugano said. “You couldn’t have seen it today because nothing happened. The worst of everything is the attitude of Chiellini. It doesn’t correspond with Italian football, crying and appealing against a rival. As a man he disappointed me totally. I had him as a reference point. You have to be stupid to think that mark on Chiellini is from today.”

Óscar Tabárez, the Uruguay manager, unused to fielding questions about the on-field eating habits of his players, lashed out at “certain media” for what he suggested was the scapegoating of the player.

“This is a football World Cup, it’s not about morality, cheap morality,” Tabárez said. “As we say in Uruguay, there are people who are hiding behind a tree waiting for someone to make a mistake.”

Perhaps there are, but with Suarez, one does not need to hide behind a tree to find evidence of him making a mistake. One simply has to watch him play football. The amazing thing about Suarez is that he seems oblivious to the dozens of television cameras, thousands of supporters and billions of television viewers who are also watching him. He truly is lost in the moment.

So, once again, the story is not about Suarez biting a player, but about him being the victim.

Loyalty is a commendable trait, but when it blinds one to the true nature of a person or a situation, then it really is more of a hindrance than a help.