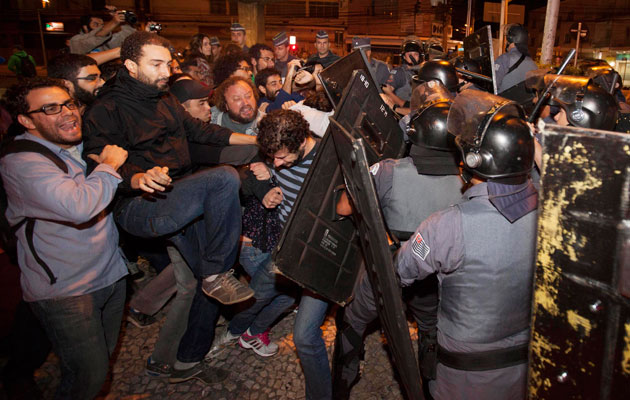 Less than three days before it hosts the opening game of the World Cup, São Paulo once again became the scene of protests, as striking subway workers brought the city to a standstill.

Security also remains a concern, particularly in Rio de Janeiro following a recent renewal of tensions in the city’s favelas.

On Monday night the subway workers’ unions confirmed that the strike would be suspended for two days, pending a ballot on Thursday, when the tournament’s first match is due to be played in São Paulo.

Many Brazilians are still uneasy about the financial cost of staging the tournament, with the latest estimates of reaching $11bn (£6.5bn).

Opponents have launched anti-FIFA campaigns on social networks, trade unions have organised strikes and activists have staged protests close to the 12 World Cup stadiums – some of which are yet to be finished.

Although the demonstrations are far smaller than last June’s protests of more than a million people, they continue to rattle the government.

The Brazilian president, Dilma Rousseff has made security to be a priority, suggesting unnamed forces are conspiring against her.

Subway workers in São Paulo are requesting a 12% wage increase, and they have been supported by activists from the Landless Workers’ Movement.

The union president, Altino Melo dos Prazeres, said the severe response from the authorities could create bigger problems for the government.

“If the beating continues we are going to talk to all the sectors. If our people bleed we are going to ask for help from the metalworkers, from the bank workers, and have a day of general strike at the opening of the cup,” he said.

The government is confident it will be able to maintain security during the event. Almost 100,000 police and 57,000 troops will be deployed to protect the venues, team hotels and training areas and to ensure that the matches proceed as scheduled.

As for the security of the expected 500,000 foreign fans now starting to arrive in the country, well, that’s another matter.