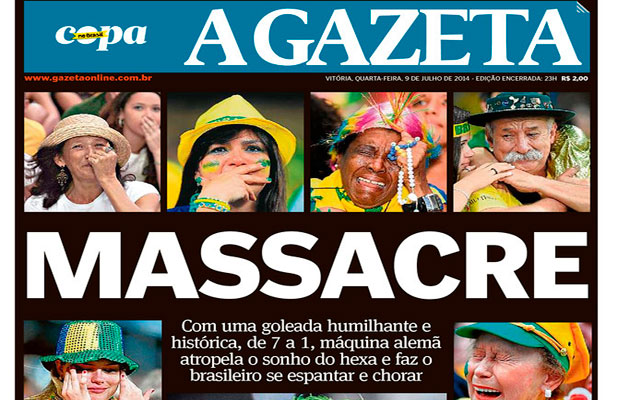 Brazil truly is a nation in shock today, and judging by the covers of the country’s newspapers, a lengthy period of reflection and indeed self loathing looks to be on the cards.

It was, declared globoesporte, the Disgrace of Disgraces.

Brazilian newspapers and websites agreed that the 7-1 hammering by Germany in the World Cup semi-final was the greatest shame in the country’s proud footballing history.

“Historic Disgrace” read the massive headline on the website of the Folha de S.Paulo.

The paper pointed out this was not just their biggest loss but the heaviest suffered by a host nation at the finals.

The globoesporte website, called the result the “Disgrace of Disgraces”, in an ironic reference to President Dilma Rousseff’s repeated claims — and tweets — that this would be the World Cup of all World Cups.

O Globo lead with the words of Luiz Felipe Scolari, who told reporters that he accepted the blame for the result.

“I’m responsible for all this,” was the paper’s headline.

It has to be said though, that some of the reaction to the drubbing was genuinely inspired. Take a look at this.