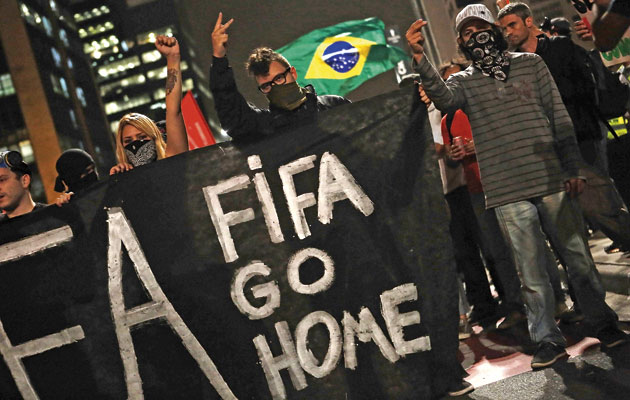 “I see the enthusiasm outside Brazil,” said Ronaldo at the end of March in his capacity as a member of the World Cup Local Organising Committee. “I’m very happy when I see that same enthusiasm here as well.”

The very statement hints that the commodity might be in short supply; that the apparent dream relationship between the World Cup and the Brazilian people is on the rocks and in need of marriage guidance.

That would also be the conclusion drawn from a song released by respected Rio musician Edu Krieger, which has become an internet success. In Desculpe Neymar (sorry Neymar), Krieger expresses that on this occasion he will not be cheering on Brazil’s poster boy and his team-mates. “We can’t be real champions,” he sings, “spending more than 10 billion…we have beautiful and monumental stadiums while schools and hospitals are on the verge of collapse.”

Accompanied just by his guitar, the song is rooted in sorrow rather than anger. “I’ve always been a fan of the national team,” he explained in an interview, “but I don’t feel comfortable supporting the side this time.

“I think the way we’ve organised the World Cup could not have been worse, especially bearing in mind what was promised and what has in fact been done. This song is a lament that I don’t feel the enthusiasm I’d like to have in relation to the event.”

Every four years Brazil builds itself up to a frenzy during the World Cup. People get together to decorate their neighbourhood with bunting and paintings, streets compete to be considered the most striking. Millions who normally have little interest in football become obsessed with the performance of the national team.

It is like a jubilee, but with an important difference: rather than commemorating an aristocratic royal family, they are celebrating themselves. This is the moment when, traditionally, their country appears in front of the entire world for positive reasons: as winners, often in enviable style. And those responsible – the players – could easily be the boy next door, the poor kid who started out with nothing more than a dream. The World Cup, then, is a hugely important time for Brazilian society.

This year, though, the feeling might be different. Hosting the event would seem to be resulting in the opposite effect of previous World Cups. Now Brazil is appearing in the spotlight for negative reasons, with its internal problems humiliatingly held up for global comment and assessment.

The protest movement, angry at broken promises and large-scale public spending, has gained huge worldwide headlines and is giving considerable headaches to the authorities, to FIFA and to the sponsors. It will be very interesting to see if people are in the mood to put up the traditional street decorations.

And yet, for all the public discontent, there is clear evidence of considerable local enthusiasm for the tournament.

One of the triumphs of the 2014 World Cup has been ticket sales. Almost all the games are sold out – tickets shifted remarkably quickly when the “first come, first served” stage opened up on the internet on March 12.

By the end of the month more than 2.5million tickets had been allocated – and, by some considerable margin, Brazilians had bought more of them than any other nationality. For all the protests, a lot of people are very keen to be part of the World Cup atmosphere.

The precise mood of the country during the tournament, then, is difficult to predict.

It could be complex and contradictory, even schizophrenic. The power of the event will surely work its magic, the novelty presence of so many foreign fans will exert an influence, but the discontent is unlikely to disappear entirely.

Perhaps the most worrying situation for the authorities is the scenario in which the home team are eliminated early. Typically in such circumstances a national depression descends for a couple of days, then life moves on and millions switch off from the tournament.

This time things could work out differently. It is entirely possible that should Brazil fall early, disappointment with the team will add further fuel to the fire of protest about the way the World Cup has been organised – all part of the pressure on coachO Luiz Felipe Scolari and his men.