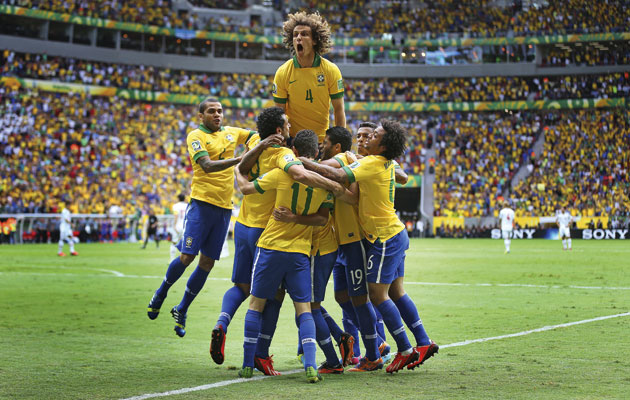 One would think that in the wake of their lamentable failure to predict the financial crash of recent years, institutions such as Goldman Sachs would refrain from forecasting future events.

But, as sure as bailout follows bust, the one thing you can rely upon from the big players in the financial markets – other than an abiding desire to avoid any kind of regulation – is that past failures have no bearing on their unshakable self confidence.

According to their calculations, hosts Brazil will beat Argentina 3-1 in the final of the World Cup. The South American countries will prevail over Germany and Spain respectively at the semi-final stage. This conclusion is exactly the same one predicted by the bookmakers. Although, when they produce their odds we call it gambling, whereas in contrast, Goldman Sachs call their methods ‘a model of the probability of success’.

Using such a model based on each team’s past performances and characteristics, Brazil emerge as favourites, with a 48.5% probability of winning a sixth world title, followed by Argentina with a 14.1% chance.

Explaining their methodology, the report’s authors state: “The predictions for each match are based on a regression analysis that uses the entire history of mandatory international football matches – i.e., no friendlies – since 1960. This gives us about 14,000 observations to estimate the coefficients of our model.

Confused? Join the club  In which case, you may be better of downloading the full Goldman report here.

But, before we mock their conclusions too much, it is worth noting that they give England just a 1.4% chance of winning the tournament. Most sober judges would concur with this verdict.

“Since its sole World Cup victory in 1966, English fans have suffered almost 50 years of continual disappointment. What is unusual about the lead-up to this World Cup is that the views of English and non-English are very closely aligned regarding the prospects for the England team: pretty much everybody agrees that England will do badly,” the authors of the report said.

Instead of delivering a rousing team talk, perhaps England coach Roy Hodgson should stick the report on the dressing room wall when England kick off their campaign against Italy in Manaus on June 12. Then again, perhaps not.

In case you were wondering whether it is worth watching the tournament now that the ‘experts’have proclaimed a winner, fear not. Four years ago, Goldman Sachs conducted an identical experiment and concluded that the 2010 World Cup would be won by…Brazil.