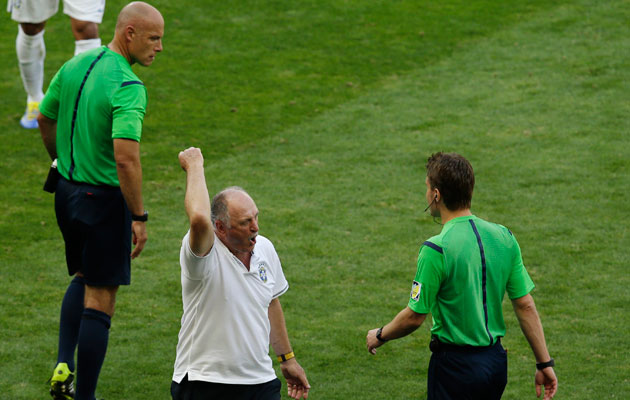 Paiva, the communications director of the Brazilian confederation and a permanent presence for many years at the side of coach Luiz Felipe Scolari, was shown a red card by English referee Howard Webb after a half-time incident during last Saturday’s dramatic second round victory over Chile.

A FIFA spokesperson said today that the disciplinary committee had opened proceedings into the incident but that Paiva was suspended for one game automatically because of the red card.

The CBF has until tomorrow to submit possible notice of appeal.

Paiva had clashed with Chilean substitute Mauricio Pinilla during a heated discussion between players and staff of both teams on their way into the tunnel. He said later: “I defended myself when he came near me. I reacted by shoving him.”

After the match Scolari complained about the pressure exerted by the Chilean bench on the German fourth official, Felix Brych.

Scolari said: “The atmosphere on our bench was very tense because the opposition were complaining so much to the fourth official. It was like war. They were almost coming into our area.”

FIFA is expected to clarify later the incident in which Greece manager Fernando Santos was sent from the sidelines before the penalty shootout against Costa Rica.

Australian referee Ben Williams appeared to allow Santos to sort out his penalty kick takers before leaving the pitch and walking down the tunnel.

No action will be taken against Arjen Robben despite his comments after the victory over Mexico that he had ‘dived’ in the first half when under pressure just outside the penalty box.

Mexico complained, in vain, that Robben had dived to win the penalty from which Klass-Jan Huntelaar struck the stoppage-time winning goal.

Miguel Herrera, manager of Mexico, said he thought the officiating of Portugal Pedro Proenca had been the worst of all the bad refereeing of which he considered his team had been victims throughout the finals.

He criticised the referees committee, headed by FIFA’s British vice-president Jim Boyce, for appointing a referee from one of the confederations whose team was involved in the match.

He added: “Robben dived three times and got the decision the third time when he should have been shown the yellow card. We hope that the referees committee saw this and the referee goes the same way as us – to his home.”