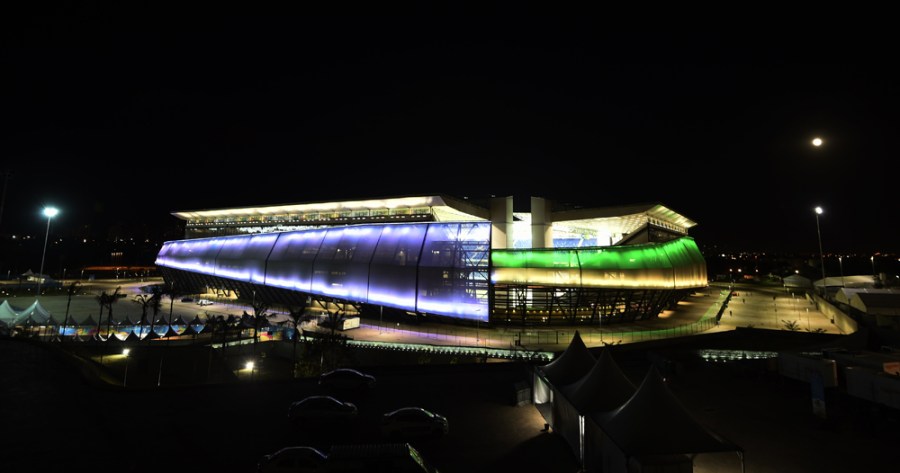 Chile have been mentioned as possible dark horses at this year’s World Cup.

Even in a group containing both finalists from four years ago, Chile are expecting to reach the knockout stages.  That underlines the progress made under coach Jorge Sampaoli, who replaced the Claudio Borghi in December 2012.

This is a new look Australia side under Ange Postecoglou. Out have gone established names like Mark Schwarzer, Lucas Neill and Hary Kewell and in have come 13 players with fewer than 10 caps. It’s fair to say that expectations are not sky high.

Chile are hoping star midfielder Arturo Vidal is fit and able to play when they meet Australia in Cuiaba.

The Juventus player has been struggling with inflammation in his right knee following an operation on his meniscus last month.

Tim Cahill will lead the Socceroos’ attack while veteran midfielder Mark Bresciano is doubtful with a back injury.

Sampaoli says Chile’s style is non-negotiable – they will always seek to impose themselves, pressing their opponents in their half of the field and creating two-against-one situations down the flanks. But that does not mean that the formation is set in stone.

Sampaoli was in charge for the last seven World Cup qualifiers: in three of them Chile defended with a back three, while the others featured a line of four.

In both cases the full-backs are expected to push up at the same time. Against weaker opponents the tendency is to field two centre-backs – one to mark and one to cover – and this is the likely template for the opener against Australia.

The inactivity of Marcos Gonzalez at club level is making his place vulnerable, but there are few alternatives in central defence. Gary Medel, despite his lack of height, will play alongside him.

In front of the defensive line, Marcelo Diaz has a vital role in reading the game, closing down the spaces and organising the play from deep. The Australia match could be an important occasion for Jorge Valdivia, a talented but wayward playmaker who is set to be used as a “false nine”. He will be tasked with threading the passes through for Alexis Sanchez and Eduardo Vargas, and make the most of runs from midfield by Arturo Vidal and Charles Aranguiz.

But Valdivia may not figure from the start in the other games. In a friendly against Spain last year, a back three, with more midfield protection, drew with the world champions, and a back three was also used against Germany. It would seem a logical step to use it in the meetings with Spain, to combat their midfield possession, and also against Holland, as protection against their speed on the transition.

A switch to a back three for the games against Spain and Holland would see Gonzalo Jara coming into the side as the extra centre-back, with Vidal being pushed further forward as an attacking replacement for Valdivia.

An alternative up front is the use of Sanchez as a central striker, with Vargas operating on the right and Jean Beausejour coming in on the left.

Postecoglou likes to play a 4-3-3, which is very much in vogue in Australia due to the national curriculum, developed by Dutch technical director Han Berger.

Whereas predecessor Osieck preferred a 4-4-1-1 shape, reliant largely upon experience and defensive structure, Postecoglou’s teams are set up to attack. Evident from his first friendly was a commitment to quick forward transition, playing out from the back, with Mile Jedinak or Mark Milligan often dropping in between the central defenders to set up the play.

The defence will be inexperienced if former captain Lucas Neill fails to play his way back into contention. Full-backs Ivan Franjic and perhaps Jason Davidson, in the problem left-back position, will be expected to push high and offer additional support to wide men Tommy Oar and Matthew Leckie, but the key could be Tomas Rogic.

Arguably the most talented player produced by Australia in years, Rogic is
a classic number 10 but is raw and has struggled with injury. It may be that he is used off the bench, with Mark Bresciano taking on more responsibility in the creative role. Bresciano, who was hit with a FIFA ban for an illegal transfer from Al Nasr to Al Gharafa, has been training with Melbourne Heart to stay fit.

Tim Cahill is still the most reliable source of goals, particularly from set-pieces, where his strength in the air, despite his diminutive frame, could be crucial. Josh Kennedy came off the bench to replace Cahill in the final qualifier against Iraq, a controversial move at the time, but he went on to score the winner.

Matt McKay is a potential “defensive” substitute, with Oliver Bozanic a back-up in central midfield. Further forward, Oar doesn’t have searing pace but his trickery allows him to create angles for crosses to the likes of Cahill and Kennedy. Dario Vidosic has an eye for goal and can pick a pass.

Cahill and Kennedy could possibly play together in a 4-4-2 diamond if they are searching for a goal late on, but Postecoglou isn’t keen on just lumping the ball in the air. More likely is the 4-3-3 becoming a more defensive 4-5-1 if Australia are trying to close out a game, with wide men Oar and Leckie tucking in.