The look on Colombia boss Jose Pekerman’s face said it all. Having trailed by three goals in his side’s penultimate qualifier at home to Chile, Colombia now had the chance to draw level from the penalty spot.

With seven minutes left, the normally stoic coach leapt from his seat and went bounding down the touchline; fists punching the air. As TV cameras chased this rare expression of emotion from the Argentinian, the 64-year-old turned and unleashed a barrage of post-watershed expletives.

Pekerman had cracked but, across the country, 47 million Colombians understood. It had been 16 years since the nation’s last World Cup finals appearance, and as Radamel Falcao slotted home the decisive spot-kick to seal a remarkable comeback and take a point, the lengthy hiatus was finally over for “Los Cafeteros”.

Last year may have been a memorable one, but ever since the page turned on 2014, Colombia’s World Cup plans have started to unravel. Falcao’s cruciate knee injury at the
end of January was an obvious hammer blow.

After years of struggling with the defensive tactical constraints of previous managers,
the 27-year-old had become a vital cog in Pekerman’s new attacking system. Falcao’s nine goals in qualifying was a Colombian record, but even if he wins his improbable race against time, he’s unlikely to be at his best. Jackson Martinez and Carlos Bacca are strong candidates to step in, but neither is tailored to the tactical plan in quite the same way.

But Falcao is not the coach’s only headache. Juan Zuniga’s long-running injury problems, Pablo Armero’s lack of playing time and concerns over Macnelly Torres’ form since a move to the Saudi Arabian league have all left the Argentinian scrambling for alternatives.

“When we qualified we could never have imagined the amount of problems we were going to have,” grumbles Pekerman. The form of waning centre-backs Luis Perea and Mario Yepes has been the coach’s most long-standing worry. Both were again ruthlessly exposed in March’s friendly against Tunisia. Time is running out to find a solution.

Still, there’s room for optimism. Colombia’s group draw has been kind and with Pekerman in control they are in good hands. Furthermore, they have relatively short distances to travel from their Sao Paulo base to games – and a World Cup in South America should provide
a sharp advantage over most rivals.

After the fiasco of 1994, when the team flopped out in the first round under weighty expectations, two decades of hopes are being kept sensibly under wraps. But even if Falcao fails to beat the clock, Colombia have enough quality to at least reach the second round. 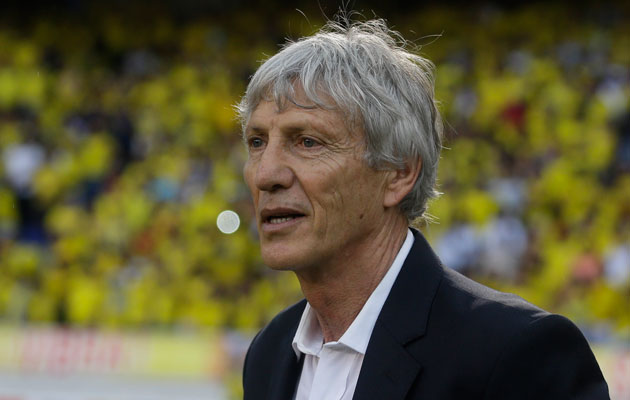 Succeeded ex-player Leonel Alvarez who was axed after less than 100 days in the job.

Patchy record as boss of Tigres where, despite saving the Mexican side from the drop, he achieved just one win in 10 before being dismissed.

Forced into retirement at 28 due to a serious knee injury following an unspectacular playing career as a midfielder for Argentinos Juniors and Independiente Medellin.

Led Argentina to the 2006 World Cup quarter-finals before losing to Germany on penalties.

Holds tight control over all team affairs and refuses to give interviews. Often locks the press out of training sessions.

Much admired for his achievements on the pitch, but prefers to keep a very low profile. Was reportedly offered Colombian citizenship upon achieving World Cup qualification.

Meticulously prepared and incredibly knowledgeable about the game. Favours a high-pressing and possession-based approach.

Assistant Nestor Lorenzo played for Argentina in the 1990 World Cup Final and was part of Pekerman’s staff at the 2006 finals. Also includes Gabriel Wainer, who is the team’s tactical guru.

Unknown. Pekerman has refused to be drawn on talks to extend his contract, which runs out after the World Cup.

World Cup 2014: Where they will stay – Honduras