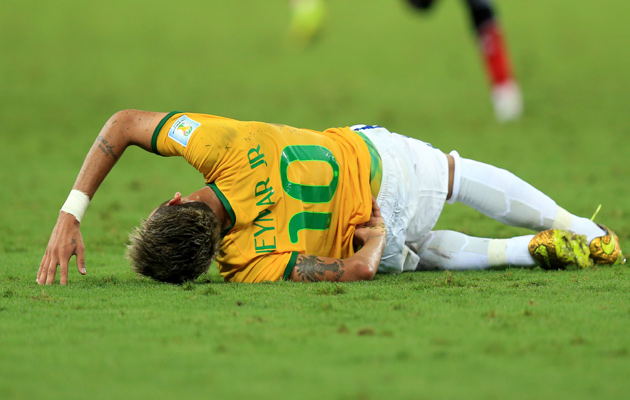 A World Cup more dramatic than distinguished, though certain realities have been made plain.

Not least the demise of Spanish football. That lacerating 5-1 defeat by Holland in the opening group match laid to rest any idea that tippy-tappy football in the Barcelona style had any claim to preeminence.

Doubts had indeed arisen in the 2013 European Cup when Barcelona were thrashed by Bayern Munich. Not that the Barca style at its best had any followers rather than admirers in Europe. It seemed, as once upon a time the Hungarian way of the 1950s had seen and Total Football twenty odd years later, the fashion to admire if not necessarily follow.

Barca, like the Hungarians of the Puskas era, looked to have found the key to sustained success. But just as Hungary by the time it came to the 1958 World Cup finals was reduced to mediocrity – a World Cup team of kickers – so the Barca way, with its studious coaching of the very young upwards, is no longer to be admired let alone emulated.

It became all too significant than after such a success, Holland became no more than a somewhat ruthlessly functional team, lucky to squeeze through at certain crucial times with Arjen Robben, the irresistible star of the win against Spain, becoming almost a figure of fun with his constant falling, or as critics would put it, and he once admitted, diving.

Luckily for him in the crucial game against an outraged Mexico when he was undoubtedly fouled in the box after a typically inspired solo run – bringing the game’s decisive penalty.

This was not remotely the first World Cup blemished by rotten refereeing, but blemished it unquestionably was. The distressing and you might say ultimate proof of which was the appalling knee in the back foul by Colombia’s Juan Camillo Zuniga, which broke a vertebra in poor Neymar’s book. Yet, it did not even elicit a yellow card, let alone the red one it deserved by an ineptly permissive Spanish referee Velasco Carballo.

The mystery of it is that this incompetent had previously an excellent reputation. Yet he was absurdly and catastrophically lenient, allowing for the bulk of the game, foul after foul to go unpunished by a yellow card. Thereby creating the context in which eventually Neymar was carried off on a stretcher.

It must be said that Neymar himself might well have been sent off in Brazil’s opening game for a swinging arm, by a largely indulgent – to Brazil – referee, but that is another and somewhat lesser story.

Just as Argentina relied so heavily on the undimmed brilliance of Lionel Messi, showing the form he didn’t in the previous World Cup, when Diego Maradona stuck  him so perversely out on the left wing, so Neymar, even if he did fade in the second half versus Chile, was the irreplaceable protagonist of an otherwise muted Brazilian attack.

For where, may one ask, are Brazil’s centre forwards? Poor Fred, who was once replaced by Jo, who himself had failed in English football, was never better than ineffectual. Yet in World Cups past, Brazil had given us the prolific Ademir in 1950, the incisive Vava in 1958 and 1962, the ebullient Romario in 1994 and the the prolific Ronaldo.

We know that Brazil, despite a glorious tradition – Julinho, Garrincha, Jairzinho – no longer go in for wingers. But what of the vanishing centre forwards?

Abysmal refereeing in that ill-starred Brazil-Colombia game also saw the maltreatment of the splendid new Colombian star, James Rodriguez, he too subjected to a series of bruising fouls without protection and eventually and so ironically given a yellow card. That David Luiz should in consequence score that remarkable and spectacular free-kick goal, rubbed salt into Colombia’s wounds. But Neymar suffered still more.

The Luis Suarez affair hung like a dark cloud over the tournament, a squalid affair indeed.

The Bite on Giorgio Chiellini was bad enough, Suarez’s statement, backed even by the president of Uruguay, was repugnant, but perhaps worts of all was Suarez’s spurious repentances, his sudden admission, allegedly at the instigation of Barcelona, who want to buy him – that he had indeed bit and was sorry for it.

What odds that he will bite again? What no one seemed to emphasise at the time was that this bite, the third recorded, was an act of sheer self-destruction, pathological to the extent that taking place beneath the sharp focus of the television cameras before countless millions of viewers, it could only end in damage to Suarez himself. He might well be incurable!

Sigmund Freud himself asserted that while neurosis could be cured, psychosis could not respond to treatment because the subject, by definition, would admit no wrong.