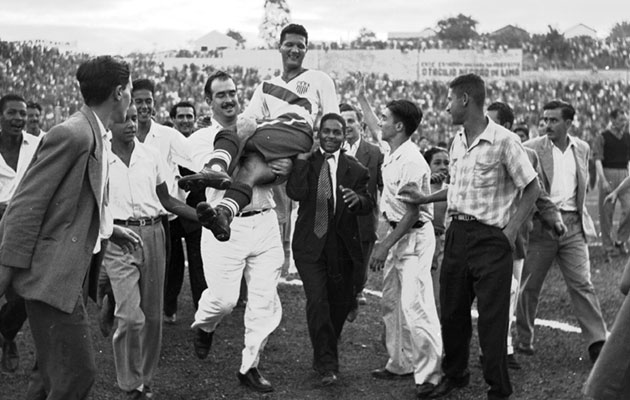 The last time England came to the capital of Minas Gerais in the World Cup they left with their tail between their legs; a similar fate awaits them on Tuesday.

One man doubly disappointed is Elmo Cordeiro. He was a 16-year-old ballboy on that fateful day back in 1950 when England – “We thought they were the kings of football” – came to play the group no-hopers of the United States in the group stage.

Elmo will be in the stadium, the redeveloped Mineirao not the old Independencia, on Tuesday to see England play Costa Rica, the orginal no-hopers of Group D.

Two significant differences from that day to this: Firstly, Costa Rica are heading for the second round along with Italy or Uruguay who will play simultaneously in Natal; secondly, England are already out unlike in 1950.

Back then England faced the US in their second group game. The most infamous defeat in England’s football history left Billy Wright, Tom Finney, Wilf Mannion, Roy Bentley & Co needing to beat Spain in their last game to reach the final group. Instead, they even blew the second chance, losing to Spain.

Elmo worked in the office for the stadium company. He could not afford a ticket. But the day before the game his boss said he could go to the game because they needed a ballboy. No special kit. No parade with the teams before kickoff. No sponsors’ gifts. Elmo wore his own shirt and shorts and, thus attired, was standing before the goal when Joe Gaetjens scored the lone, historic goal.

“The England players all had their heads down at the end,” recalls Elmo whose other disappointment from that day was that he never saw Stanley Mattews play. Matthews had joined the squad late after an FA tour to Canada and manager Walter Winterbottom decided he could be saved for later challenges.

Elmo recalls: “There was no match programme. They just announced the names of the players over a little loudspeaker. I heard all the names but Matthews wasn’t among them. I didn’t understand it. I’m sure they would have won if he had played.”

England’s defeat back then was their first disappontment for Elmo; now they have let him down again, returning to Belo Horizonte already doomed to failure.

The World Cup world was very different then. England had been staying out at the country club of an English-owned mining company at Nova Lima. Today that is 40 minutes from Belo Horizonte. Back then the journey in – by local taxi not luxury team bus – took two hours. “We just had dirt roads then,” says Elmo.

That was not the only difference.

Elmo, his mind drifting back to survey the scene, says: “It was much more formal then. People went to match wearing suits and ties and maybe a formal hat. Very few women ever went to football. It was a man’s world.

“England were the inventors of football and everyone had wanted to catch a glimpse of them when they arrived.

“Physical preparation was different too. Not like today. They did some minimal jogging around the field, some breathing exercises and that was it.

“The best prepared team at that World Cup were Uruguay, and they won it.”

By the time the Uruguayans defeated hosts Brazil in the final England’s players had long since flown home, the result dismissed back home as a mere footballing blip in a far-off foreign land.

At least, this time, the reaction has been different.

The World Cup exit from Belo Horizonte in 1950 had no significant consequences. Three years later English football was still existing in a state of lazy complacency. Then Hungary came to Wembley and won 6-3. Only then did the game wake up.

Right back in Belo Horizonte and then against Hungary was Alf Ramsey; the same Ramsey who would manage England to World Cup success in 1966.

Elmo remembers. He can run off, from memory, the England team line-up from 1950 and the Hungarians from 1953.

From 1950 it took 16 years for England to learn the lesson and win the World Cup. FA chairman Greg Dyke wants a repeat in Qatar. That is highly optimistic. Qatar is only eight years away . . . not 16.