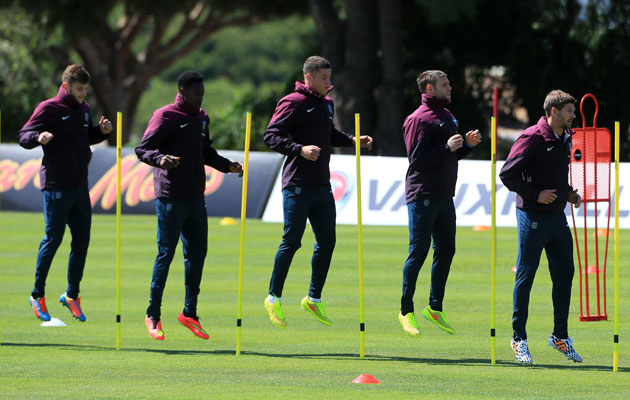 England face Italy in their World Cup Group D opener in the equatorial jungle city of Manaus on 14 June, before taking on Uruguay and Costa Rica.

“It’s about learning to be comfortable being uncomfortable,” said England boss Roy Hodgson.

Experts from Loughborough University are helping monitor players during training in Portugal to determine the amount of fluid they lose.

“We tested how much they sweat, how they will be able to recover and what can be done to help,” added Hodgson.

“We started off on the first day just with them wearing the extra gear for the warm-ups,” said Hodgson at England’s training camp at Vale Do Lobo. “Then we’ve increased it.”

By this stage, Wayne Rooney had evaporated.

Unfortunately, no matter how well prepared you are, there is nothing you can do about the elements, which yesterday were proving stubbornly unhelpful.

Temperatures can top 30C in Manaus in June but humidity levels can reach more than 80%.

Temperatures at Vale Do Lobo on Wednesday were about 15C.

But credit to Hodgson and his team for going the extra mile. It is all a dar cry from the last time he was in charge of a team at the World Cup finals. The 68-year-old Hodgson coached Switzerland at the 1994 World Cup and prepared his players for the heat of the United States by using a sauna.

“Compare that to what we are doing now and it was an unbelievably amateurish performance,” he said.

Nothing, it would appear, is being left to chance. Although, if Hodgson really did want to simulate the exact conditions England can expect to face when they meet Italy on June 14, he would ban players from touching the ball and instruct them to run around chasing shadows for 90 minutes.