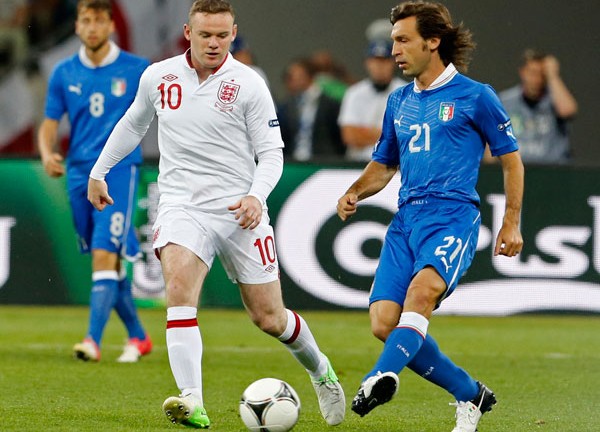 Since Roy Hodgson took over as England coach, he hasn’t been scared to try out a variety of different formations, often reacting to which players he has at his disposal. His most favoured option has been 4-3-3, a fluid system that also helped disprove the theory that Steven Gerrard and Frank Lampard can’t play together in the same team.

However, in Brazil, and particularly for the crunch games against Italy and Uruguay, there will be a need to keep things tight, which could see Hodgson playing two holding midfielders as part of a 4-2-3-1 formation. Gerrard would be one, possibly partnered by Jack Wilshire if he is back to full fitness.

Ahead of them would be a deeper-lying Wayne Rooney and a tucked-in wide-man.Adam Lallana is well-suited to the role, although Hodgson is a big fan of James Milner and started him in every game at Euro 2012. Past selections point to an out-and-out winger on the other flank, and with Theo Walcott out injured, this seemingly clears the way for Raheem Sterling. This would leave Daniel Sturridge operating as the lone front man.

An even more cautious approach for the team would be a 4-4-2 set-up – Hodgson’s favoured option at club level – but one that drew plenty of criticism when he introduced  it for a friendly against the Republic of  Ireland last year.

The more expansive 4-3-3 formation is likely to be introduced when England are chasing goals, potentially in their final group outing against Costa Rica. This would enable the full-backs, Glen Johnson and Leighton Baines, to push down the flanks, safe in the knowledge that there is always someone to cover in behind them. This would see Rooney adopting a more central role, with Sturridge running the channels down the right.

And then, of course, there is England’s more traditional “Plan B” – hitting it long to a big target man. Hodgson isn’t afraid to use it, and it worked for him against Sweden in Euro 2012, but the chances of seeing it in Brazil were reduced when Andy Carroll was left out of the coach’s final 23.

By now, foreign observers will have understood that Prandelli’s Italy is not quite the usual defence-oriented, speculative Italy. In agreement with his players, the coach has always wanted to impose a more positive style, with Spain as the ideal role model.

However, on the eve of the finals, a realist might suggest that he would be better off resorting to old-style, tried and tested Italian methods. In other words, while he has a more than useful backbone to his team, in the shape of Gianluigi Buffon (injured for the England game) in goal, Giorgio Chiellini and Leonardo Bonucci in defence, Daniele De Rossi, Andrea Pirlo and Claudio Marchisio in midfield. However, his attacking line-up right now represents a major question mark.

Mario Balotelli is obviously the main man up front but will he reproduce his Euro 2012 level of performance? Even if he does, it is unclear who will play alongside him.

Prandelli likes to play with a positive 4-3-2-1 line-up where the game plan is to knock it around in midfield and wait for Pirlo to either hit a through ball for Balotelli and others, or to score from a free-kick.

As always, much will depend on Pirlo, meaning that De Rossi and Marchisio will cover for him, affording him time and space to spray the ball around and keep the team ticking over nicely. If Pirlo is man-to-man marked, then the supply line can break down.

Much also depends on the ability of full-backs to provide the attacking options.

It is not impossible that Italy may also resort to a classic five-man defence. If Romulo is picked, many will see his last-minute inclusion as a clear indication that Prandelli feels the need to cover himself.

A return to defensive methods and a 5-4-1 could see Gabriel Paletta play central defence alongside Bonucci and Andrea Barzagli, freeing up Chiellini for left back.

The use of a player like Romulo in midfield could be useful if things do not work out for the unpredictable Balotelli up front, prompting Prandelli to field an inexperienced or lightweight attack (Ciro Immobile, Lorenzo Insigne or SebastianGiovinco) or even recall the mercurial Antonio Cassano. In such a case, Romulo could offer a deal of protection to  the overworked midfield trio of Pirlo, Marchisio and Montolivo.