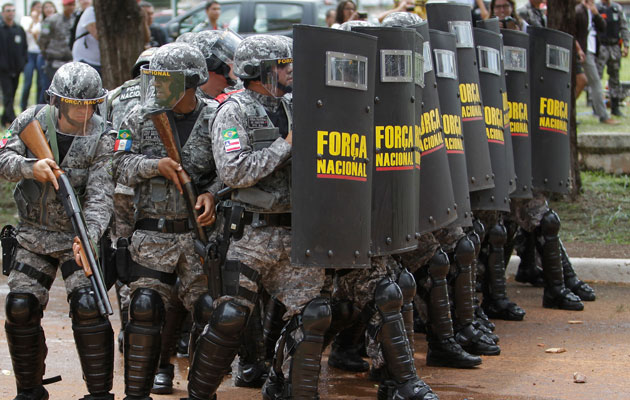 FIFA secretary general Jerome Valcke has moved to allay security concerns ahead of the forthcoming World Cup and told supporters to enjoy the World Cup in Brazil.

Reports have focused upon rising street crime and civil unrest as a concern for fans attending the tournament.

“Security is an issue everywhere in the world. It also depends on the way you behave,” he said. “Make sure that you just enjoy Brazil as Brazil is. If you are told in certain cities that you should not walk in certain zones, you should follow that. There are zones and parts of cities where you don’t go. It’s not only in Brazil, all over the world it’s like this.”

Valcke said FIFA has done all it can to guarantee fan safety in each of Brazil’s 12 World Cup host cities.

“The security in and around the stadiums is no issue. Everything is organised here, the same goes for the fan fests. It’s a time to enjoy yourself. The security in general is good. Brazil is regularly organising major events. You are a guest of the country and you should always respect the country where you are,” he said.

While Valcke was reassuring supporters about the unlikelihood of them being the victims of crime, Brazilian police officer Mario Leite was offering more pragmatic advice to those visitors  unfortunate enough to find themselves in the wrong place at the wrong time.

“Tourists coming from Europe or the US don’t come frequently and aren’t used to seeing these types of crimes. Since they’re not used to it, they will react to an assault.”

The Brazilian authorities are distributing pamphlets outlining the potential dangers.

“With the pamphlets, they know not to flaunt certain objects, to be careful at night and to only walk around if accompanied,” Leite added.

Hardly the carnival many will be hoping for.