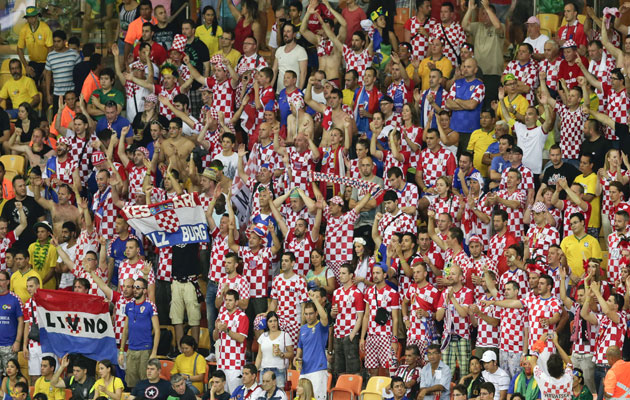 No anti-racism officers have been deployed at the World Cup in Brazil despite such a proposal in March from the task force headed by Jeff Webb, the FIFA vice-president who leads the Central and American confederation (CONCACAF).

The failure to support rhetoric with responsible action emerged in exchanges at a media briefing between Webb and the Swiss lawyer Claudio Sulser who chairs FIFA’s disciplinary committee.

The two had stepped up to address FIFA’s use of the World Cup quarter-finals tomorrow and Saturday as a platform for its anti-discrimination message. Instead they found themselves under pressure to explain what had gone wrong rather than what was going right.

Sulser was challenged to explain why no disciplinary action had been taken over Mexican fans’ insults aimed at the Cameroon goalkeeper and over a Nazi slogan banner displayed among Croatia supporters.

He said the insulting chants had been deemed as generalised and not aimed at one particular player while formal proof was lacking over whether the banner had been wielded by Croat fans. He added: “We try to adopt coherent behaviour [over sanctions] but that’s difficult.”

Webb, obviously frustrated by Sulser’s adherence to the letter of the law, cut in to say: “This is what we are trying to work on and should have been in place for this World Cup.

“There is no reason why we don’t have anti-discrimination officers here doing proper reporting. There is a disconnect between accountability and responsibility. Whether [insulting chanting] is targeting one individual or the entire team it’s discrimination.

Webb was appointed to head up the anti-racism task force in the spring of 2013 by FIFA president Sepp Blatter. Tighter regulations were approved by congress and Blatter has talked regularly of ‘zero tolerance’ on racism.

However Zurich red tape had blunted Webb’s wish for practical progress in Brazil.

He explained: “The action plan presented to the FIFA administration in March was first to train FIFA anti-discrimination officers. Various NGOs were available to provide this training. As to the reason why [it was not enacted], I couldn’t speak to that.

“We identified this as one of our top priorities. These would be people who can provide disciplinary committee with outlines as to what has taken place in the stadium. That is their sole purpose and their action during the game: to focus and provide views, opinions and reports on anti-discrimination activities.

“It is very unfortunate, what’s happened. We have employed such officers in CONCACAF, UEFA has been using FARE [Football Against Racism in Europe] for years and FIFA, hopefully at the next tournament, will be able to have them in place.

“Really this is one of the key parts of fighting against racism and discrimination.”

Webb did acknowledge that Sulser’s disciplinary committee needed guidance on improved and enhanced regulatory tools to be able to sanction anti-discriminatory behaviour, whether in the stadium, on the pitch or within further reaches of the game.

However he also said that FARE had offered to provide anti-discrimination officers but that FIFA had preferred to train its own.

In defence of FIFA Federico Addiechi, head of corporate social responsibility, conceded that the “a lot of effort” had been put into the officers proposal and that funding had been confirmed in April.

However, Addiechi added: “The training for each of the 32 participating associations is not something you can do in the proper way in the period of time so that’s why it was not possible to be done at the level FIFA requires.

“We have an excellent contact with FARE that is long-standing but FARE works basically in Europe. When it come to anti-discrimination matters from other regions of the world you need experts from there so this was a problem and it takes some time to do [the training] at the level the FIFA World Cup requires.”

Summarising the work of the task force so far, Webb said the priority had been tighter rules approved last year and that the next phase concerned “education among federations.”