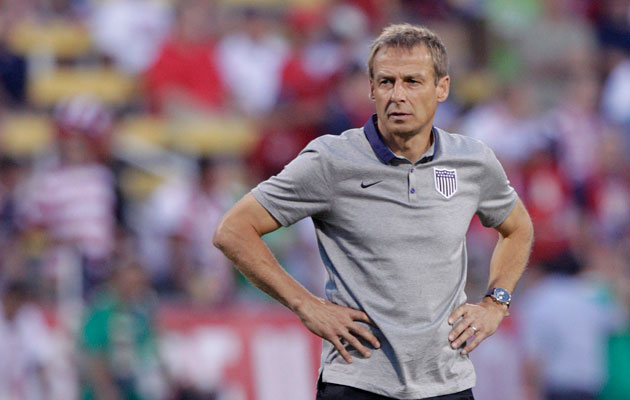 The highlight of Ghana’s qualifying campaign had Michael Essien at the heart of it – somewhat ironic given both a lack of game time at club level over the last years and his long absence from the national side. His storming box-to-box runs through the midfield proved the pivot around which the “Black Stars” constructed one of the most famous qualifying wins of all time on the African continent: a 6-1 mauling of multiple African champions Egypt in Kumasi that set them on their way to Brazil.

Essien’s incisiveness through the middle, with Sulley Muntari alongside and Kwadwo Asamoah out wide on the left, saw Ghana rampant in a performance that offered them plenty of confidence going to the World Cup – even with a difficult draw.

Just like his predecessor Milovan Rajevac, coach Akwasi Appiah favours a 4-2-3-1 formation, utilising the pace and strength of Asamoah Gyan up front. His support will come from the recently returned Kevin-Prince Boateng or the promisingAbdul Majeed Waris.

Out wide, the likes of Mubarak Wakaso and Andre Ayew also offer good options, while the full-backs, Daniel Opare and David Addy, sit relatively high, even if their cover can be a little sloppy at times.

Like all their African contemporaries heading to Brazil, Ghana’s weakest area is defence and there is a potential crisis in the goalkeeping department, with Fatau Dauda struggling for form and game-time. Too many heavy first-touches and poor decision-making in recent friendlies is another area which Appiah will look to work on in the build-up to Brazil.

But on the front foot, Ghana will prove capable of pushing the ball around, holding possession and testing the most solid of defences with their pace and incisive passing. .

If they are forced to chase a game, Ghana tend to push their wide-men further forward, albeit at the expense of their defensive duties. The emergence of Waris also gives Appiah the chance to switch to 4-4-2, with the Spartak Moscow man operating as a genuine supoort striker alongside Gyan.

Klinsmann’s basic formation is a 4-4-2, shading in its defensive version to a 4-1-4-1. The back line is Klinsmann’s biggest headache, where he has to find the answers to an overall lack  of speed, and an out-of-form Gonzalez. The likely set-up is  a central pairing of Omar Gonzalez and the comparatively inexperienced Matt Besler, with Michael Parkhurst at right-back and DaMarcus Beasley on the left. Expect Gonzalez and Besler to stay home, while Parkhurst and Beasley both have plenty  of attacking skills.

The favoured defensive midfielder is Jermaine Jones, but Kyle Beckerman  is a strong challenger. Michael Bradley is a fixture in centre midfield, with Fabian Johnson on his left, Graham Zusi to the right.

Clint Dempsey plays up front with Jozy Altidore – but Altidore’s lack of goal-scoring form could open up a place for either Aron Johannsson or Julian Green.

Dempsey goes into the World Cup in  fine scoring form. He will get good support from Bradley, adept at providing dangerous through balls, while Zusi is a good crosser. If Altidore proves ineffective up front, the likely replacements to play alongside Dempsey look good – Johansson, coming off a 26-goal season at AZ, and the highly promising youngster Green.

This formation is geared to Klinsmann’s wish to play a high pace, high pressure style. But it brings its  own problems when opponents counter attack rapidly. The ability of the USA’s unreliable defence to deal with those situations is a source of concern. At the  least, it means a tough time for the defensive midfielder, where Jones’ aggressive style would be likely to attract yellow cards.

As for an alternative, Klinsmann will withdraw a forward into the midfield to make it a 4-5-1. Klinsmann has often played with a single forward, usually Altidore, and having Clint Dempsey and Landon Donovan in a five-man midfield even though they’re the best US scorers. One of the central defenders – Jones or Beckerman will mainly serve as a sweeper in front of the back four. Without Donovan, though, who was controversially omitted from the squad, it’s hard to see if there is  Plan B.