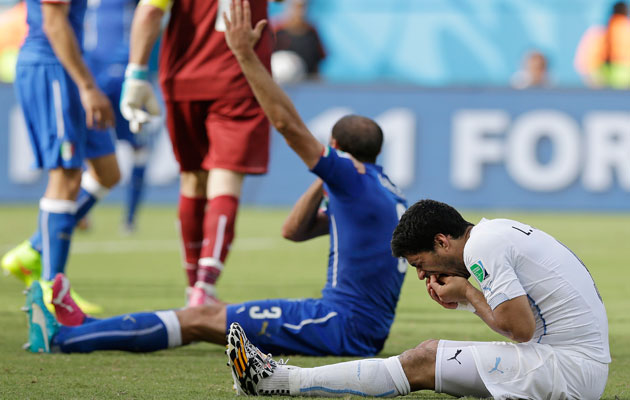 Match overview: A draw is good enough for Italy to qualify as they have a superior goal different to Uruguay. Italy have lost only three of their 19 World Cup games against South American opposition – against Chile in 1962, the 1970 final and the 1978 third place game, both against Brazil.

Key moment: The red card shown to Claudio Marchisio. The midfielder was unhappy with the decision, but the well-positioned referee made the right call. Until that point Italy were comfortable, but the numerical advantage appeared to inspire Uruguay and they were finally able to take the game to their opponents.

Man of the match: Diego Godin. Scored the winner from a set piece and was a rock at the heart of the Uruguay defence.

Matter of fact: Four time winners Italy have been knocked out of the competition at the group stages for the first time.

Talking point: Giorgio Chiellini is convinced that Luis Suarez bit him towards the end of the match. The Italian defender complained to the referee, but to no avail. However, television replays appeared to show the Uruguayan sinking his teeth into the Chiellini’s shoulder. If so, that is surely the end of Suarez’s World Cup.