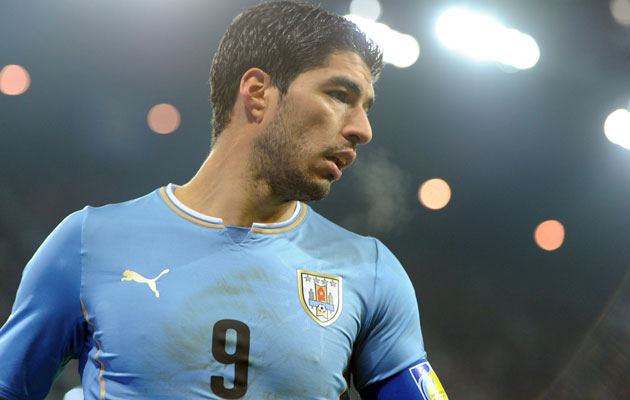 Suarez is recovering from surgery after damaging the meniscus in his left knee during a pre-tournament training session on May 22.

The Liverpool striker, Europe’s joint leading goalscorer in 2013-14, returned to training on Friday and was able to do some jogging and stretching exercises.

There has been no word as to whether he will be ready to figure in Uruguay’s World Cup Group D opener against Costa Rica this weekend. But Suarez has declared he expects to be back to full fitness.

“Emotionally, I’ve felt fine; psychologically, I’ve been spectacular,” he told the Guardian. “At no time did I feel pressured, at no time have I felt sad because at no point did I think there was a chance of me missing the World Cup.

“The thought never went through my mind. I could have really cried [in pain] because of this injury but I didn’t because I knew. I knew.

“When the doctor first spoke to me, three little tears fell — but no more. My wife said: ‘I can’t believe how strong you’re being.’ But I knew I’d make it.

“What you don’t know is how the knee will react. Today, I could say to you: ‘Yeah, I’ll make it to the first game.’ Or: ‘No, I prefer to wait for the second or the third.’ But you only know for sure as you progress and you see how the knee reacts.

“You can reach the 20th day [of recovery] and think, ‘I’m flying here,’ but then that day your knee swells up and everything slows down. For as long as the knee resists and there’s no pain, so long as the quadriceps strengthen, you’re OK.”

Suarez said: “I saw reports saying that I had told the Liverpool players I would make it for the game against England, for sure. But I didn’t say that.

“The day of the operation, I exchanged messages with Stevie and Glen. They said: ‘Hope to see you in Brazil.’ And I said: ‘Yeah, see you there.’ That’s not exactly the same thing. I never said I’d definitely be there.

“This is the game everyone is looking forward to most here. It’s incredible to see how Uruguayans have followed Liverpool; they’ve become fans and that makes me feel very proud.

“To see an entire country waiting on the Liverpool games is incredible or to see people angry because they can’t watch it because it’s only on satellite TV. People are getting up early in the morning to watch us play.”

Suarez has identified weaknesses in England that Uruguay can exploit, adding: “They do have weaknesses at the back and I know what they are. I won’t be saying [what they are publicly]… but in the Uruguay squad, I will.”