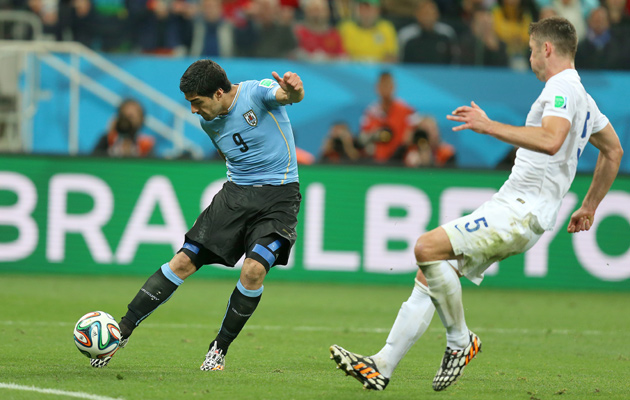 “Suarez does not bite them, he swallows them,” was the somewhat predictable headline in Ovacion , referring to the Liverpool forward’s infamous bite on Chelsea defender Branislav Ivanovic.

According to the newspaper his performance was revenge for the criticism the 27-year-old had endured in England.

“As all Uruguayans dreamed, Luis Suarez returned just in time against England, and was the hero”

“The Pistolero got revenge for so much criticism received from the English by leaving them on the brink of elimination. It is true that England was the country which sheltered him and brought him to be one of the best forwards in the world (and why not the best?), but it was also the place which has systematically mistreated him.”

Presumably, it would have been better for everyone had England turned a blind eye to him biting and racially abusing opponents.

Let’s be clear here, Suarez deserves immense credit for the way in which he has performed on the football pitch over the last 12 months. But to suggest that he has been victimised during his time in England, just does not stand up.

Footballers, we’re often told, live within a bubble, but it’s clear that they are not the only ones. When partisanship or patriotism become involved, rationalism and perspective are the first casualties.

As for Suarez, who has never regarded himself as anything other than a victim, he too saw last night’s result as some kind of karmic retribution.

“It was one of the best games I’ve played,” he said afterwards.

“It’s an amazing moment for me. Maybe a few days ago I thought this wouldn’t be possible. Before the game too many people in England laughed about my attitude over the last few years. This is a very good time for me. I want to see what they think now.”

One is reminded of the old Bob Monkhouse joke.

“They laughed when I said I was going to be a comedian. Well, they’re not laughing now.”

In fact, when it came to Suarez’s many misdemeanours, no one laughed; some people were horrified, others revolted, but no one laughed.