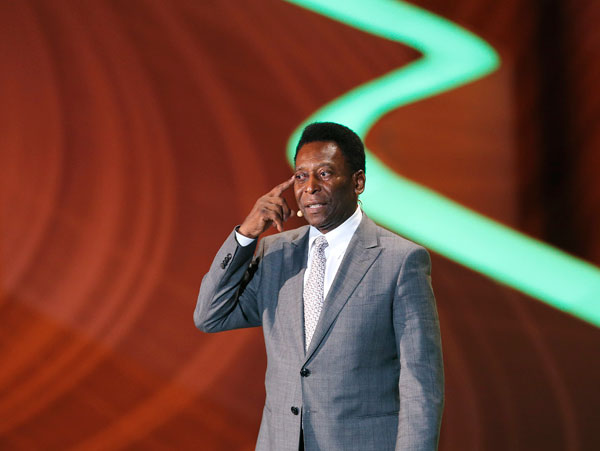 Pele has defended himself after protesters in Rio de Janeiro last week called him the “traitor of the century” for backing his country’s hosting of this summer’s World Cup.

The 73-year-old, who led his country to three World Cup titles between 1958 and 1970, criticised the demonstrators who marched during last year’s Confederations Cup, and urged his compatriots to “forget all the commotion and remember how the Brazilian squad is our country and our blood”.

His words did not go down well with the protestors who viewed the three-time world Cup winner as out of touch with popular sentiment and too closely aligned to FIFA. Last week, The Times reported 150 people in Rio staged a rally with the sole aim of criticising Brazil’s best known sporting icon.

At a conference in Dubai on Sunday, Pele moved to explain his position, telling The National he is in agreement with demonstrators’ calls for improved public services, but refuses to boo the national team.

“If the corruption does damage to the country, it is not our fault because football and the national team is the most important income to Brazil. I agree that the people need hospitals, I agree they need better lives, but I cannot agree with them booing the players. This is a political issue with the politicians who rob the people. That’s what I was trying to say.”

With the tournament less than three months away, Pele admits he expects a repeat of the demonstrations that shook Brazil last summer.

“We had a problem there before and during the Confederations Cup with a lot of protests,” Pele said. “Fortunately, Brazil won [the tournament] and everything calmed down. We are going to have the same problem at the World Cup because if everything goes normal, things will be calm, but if Brazil has a difficult game and things do not go so well, we could see problems and they [the protesters] will use that.

“I am against such protests because the players do not have anything do with the corruption.”