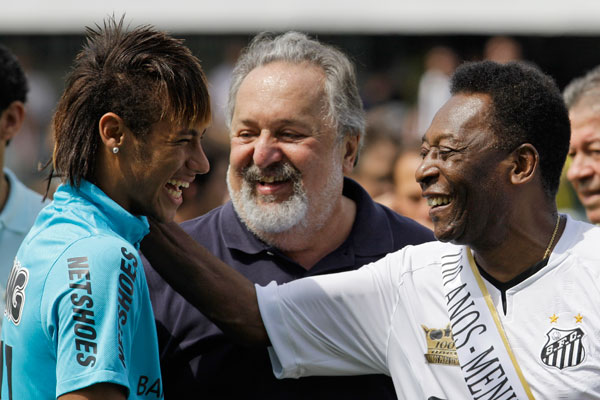 In remarks that are unlikely to endear him to his young protege, Pelé has said that Neymar has a habit of diving on the pitch.

The three-time World Cup winner was speaking about the man on whom most Brazilian hopes for this summer’s tournament reside.

“He also had the same problem at Santos. I think he looks to create fouls and situations that aren’t there. He has improved a lot in that aspect though because things are different in Europe,” Pele told ESPN.

According to the Brazil legend, the player’s experience at Barcelona can only be a good thing for the national team.

“Football is a harder, more physical game in Europe. It’s a great experience for him to grow as a player,” he added.

Pele did add a note of caution when it came to the high level of expectations being heaped upon the 22-year-old.

“The World Cup is a tournament, it isn’t just one game. Everybody expects him to win it for Brazil and that’s very dangerous for him,” he warned.

Neymar’s propensity to dive has not gone unnoticed. Here is one of several video compilations of some of his more theatrical moments.

To be fair to the Brazilian, although that tape also includes a fair number of dives, it also shows that while he has a tendency to exaggerate the degree of impact, he is also  the victim of an alarming number of fouls.