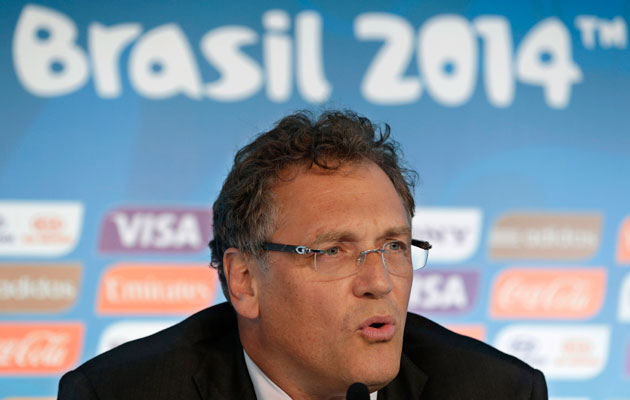 FIFA secretary general Jérôme Valcke has admitted that visiting fans are in for a tough time when they arrive in Brazil for this summer’s World Cup.

Hundreds of thousands of fans who are expected to travel to Brazil will be forced to pay exorbitant prices for limited transport and hotel options.

Valcke advised supporters to make arrangements before they travel to Brazil, because when they arrive, the options will be extremely limited.

“I know it’s difficult to speak without creating a number of problems…but my message to the fans would be just make sure you are organised when you go to Brazil.

“You cannot sleep on the beach, firstly because it’s winter … Make sure you organise your accommodation, you cannot just arrive with a backpack and start walking, there are no trains, you cannot drive (from one venue to another).

“Don’t just turn up thinking it is in Germany, that it’s easy to move around the country. In Germany, you could sleep in your car, you can’t do that (in Brazil).”

Brazil’s preparations for the country’s biggest ever sporting event have been plagued by delays in building stadiums and other infrastructure.

Critics say organisers have compounded their problems by staging matches in 12 cities around the country when eight would have sufficed.

Valcke said FIFA was persuaded to agree to so many host cities by then Brazilian President Luiz Inacio Lula da Silva – who, like most politicians, was trying to be all things to all people.

“How do you say (in advance) it is not going to work?” said Valcke.

“It’s true you multiply the risk by having more stadiums. But you face a situation where you have a government and a president, at the time it was Lula, who is explaining to you that the … World Cup should be for the whole of Brazil and not just limited to a few cities.

“He said that the last time Brazil had the World Cup was in 1950, that this World Cup is in a country which is in development, that it is important to bring all the people together and to bring this energy to Brazil.”

The situation was not helped by the perplexing decision to make teams play their group games in three different venues rather than staying in the same place.

“I was thinking that the logical thing is to divide the 32 teams in four groups and avoid moving them to (other) zones of the country,” said Valcke.

“It was also a request from Brazil because they did not want Brazil to play only in one corner of the country, and that they could not make Brazil travel and all the other teams just stay in one place.

He admitted that Brazil’s huge size made a big difference but added: “You are not looking at all these factors to make these final decisions, you look more at the spirit of the competition.”

With regard to Brazil’s creaking infrastructure, Valcke said FIFA was always aware of the problems.

“We knew…but it was in 2009 and you can expect you have five years to make a change, five years for a country to make sure that when a decision is made at the request of the country that the structure is in place to deliver what you have agreed,” he added.

Alas, although the stadiums are virtually complete and will be full for most of the matches, change has come to late What will be missing is that intangible sense of a a country becoming immersed in a World Cup, courtesy of the army of travelling fans. And for Brazil and also for the visiting fans, that is a shame.