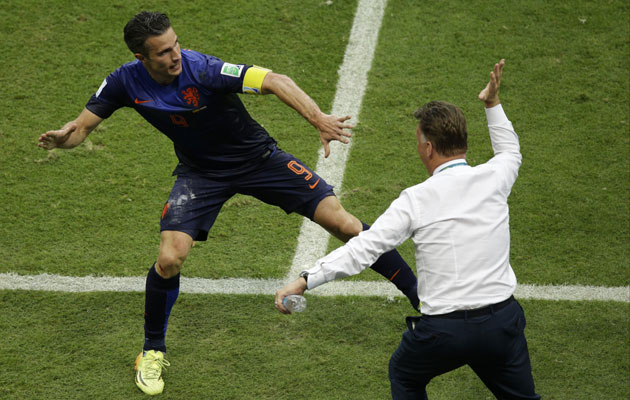 Holland’s extraordinary demolition of Spain in Salvador yesterday is still sinking in. No defending champion has suffered such a disastrous reversal of fortune in an opening game. Spain lost their opening game of the 2010 finals, but it is hard to see them recovering to make the second round this time.

The Spanish implosion may have been triggered by a catalogue of errors from Iker Casillas, but credit is also due to Holland coach Louis Van Gaal. His pre-match switch of tactics to a more defensive 5-3-2 gave them a shape and structure to take Spain apart in the second half.

Van Gaal, a man not noted for his modesty, will be happy to take credit for the tactical innovations. His teams, from mid-1990s Ajax through to Bayern Munich in 2010, have always played in a 4-3-3. So it was a bold move to change from the conventional Dutch model to a formation which saw Holland play many more long balls than is usual for a Dutch side.

It could be argued that 5-3-2 was actually more akin to a Total Football-style 3-4-3. The full-backs were able to push into midfield, as Daley Blind did with great effect on the left against Spain, while Wesley Sneijder, the most advanced of the midfield three, was quick to link with Van Persie and Robben to form a counter-attacking attacking trio.

Exciting innovations from Van Gaal, but they were largely forced upon him by the pre-tournament injuries to Kevin Strootman and Rafael Van der Vaart.

Had all his players been fit, Van Gaal would probably have stuck with his tried and trusted 4-3-3. However, the reduced midfield options prompted him to play two central midfield protectors in Nigel De Jong and Jonathan De Guzman, with Sneijder in front of them.

The full-backs Daryl Janmaat and Blind provided the extra bodies to snuff out the Spanish passing patterns. Robben’s pace and directness, along with some superb individualism from Van Persie, did the rest.

The 5-3-2 worked against Spain, with remarkable results, but don’t be surprised if Holland revert to a more attack-minded 4-3-3 in their next match against Australia.