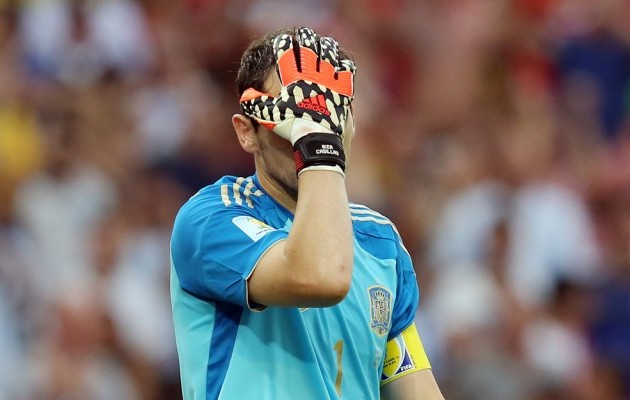 “It is logical that the Spanish fans are disappointed, but the respect they should have this selection must be eternal. They achieved what no Spaniard imagined they could get. They made millions of Spaniards happy. They made everyone afraid of this team”

It was Marca which perhaps best illustrated the sense of loss Spain will feel at the demise of a once-great, and at times, nigh on invincible team.

“The ending was horrible. It had to come sometime, it was assumed, but never could such a painful, so unrecognizable and vulgar farewell be imagined. Goodbye, World. Spain is out and their punishment is the humiliation of having to play next Monday against Australia in the game of shame between the first two teams eliminated from the championship”

“Spain reached the end of the most beautiful time in its history. There was no better land in which to do it. Two European Championships and the World Cup after a tyrannial reign, the squad is buried at the Maracana with the same noise of a giant collapsing”

“An absolute disappointment for a generation that put Spain on top, which has fallen so seismically”

“Farewell to the World. Humiliated, beaten, crushed, without pride or honor. In the saddest way”

“An absolute disappointment erupted again on Wednesday in the Spanish team, which completed its disaster in the 2014 World Cup with a defeat against Chile and rapid elimination with a 2-0 defeat. The current world champions were unrecognizable at Maracana stadium”

“An unmitigated debacle, with nothing to object because the title defence has lasted 180 minutes in Brazil 2014, eliminated in the first phase as an insignificant team beaten 5-1 by Holland and 2-0 Chile”