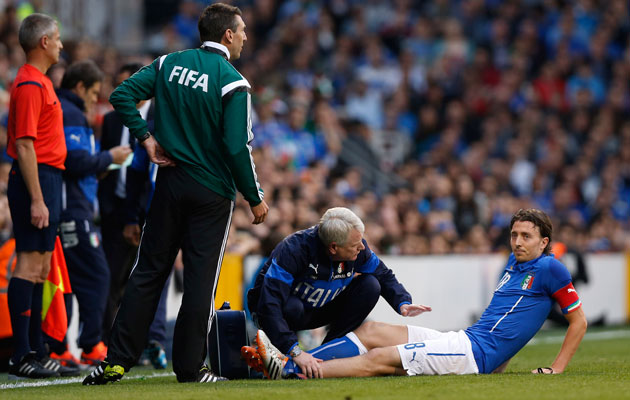 For six seasons now, Milan midfielder Riccardo Montolivo has been a regular feature in Italian teams coached by first Roberto Donadoni, then Marcello Lippi and now Cesare Prandelli. In an Italian player planet dominated by the vicissitudes of such as Mario Balotelli or Antonio Cassano, the former Fiorentina player tends to fly well below the “contoversy radar”.   His marriage in May to his girlfriend of five years, model and actress Cristina De Pin, was an exception to this rule.

When you meet him, he seems like the ideal son of the family next door, the guy who has got a good job at the local building society. His 56 caps, however, are proof that he can also play a bit. A playmaker who can play in central midfield in front of the defence or left-side midfield if necessary, Montolivo is a perfect cog in the “hold on to the possession” football (perhaps once inspired by Barcelona’s tiki taka) that Cesare Prandelli preaches. You could call him an Italian Paul Scholes.

Having coached him for five seasons at Fiorentina, Prandelli sees him very much as one of his “tried and trusted” faithful.

How will Italy do in Brazil, how far can you go?

I would be careful about making too many predictions. Everybody dreams of going all the way and we set off with that as our aim. Maybe we will be able to surprise people again. Obviously, this is the World Cup, it’s very complicated and there are a lot of good teams, probably some of them stronger than us but, and I’ve said this several times, we’re a good team and if we play as a team, then we can cause problems for any side in the world.

What is the minimal objective for Italy?

That’s obvious, the basic minimum is to qualify for the second round…We all set out with a dream and we’re in a difficult first round group with very strong teams, anyone can see that…The first game  against England is very important because in a competition like the World Cup, the first match often conditions the way the group will shake down.

How do you compare this side to that of two years ago at the European Championships?

I would say we are more ready, better prepared and this is obviously because we have had another two years of work together. You’ve got to remember that we have been working for four years now with the same coach, Prandelli, and that inevitably makes you better prepared, stronger. We’re just trying to put it all together now, one brick at a time, so that we are ready to go for that first game, which to my mind is the toughest game of the whole competition for us.

That is the second time that you have mentioned England. So what do you make of the current England?

I haven’t seen much of them recently and we will get down to preparing that game in the days before the match, but clearly England remains a side of great tradition with some terrific players…Two years ago when we met them in the European Championships, we played really well but they made it difficult for us so it went all the way to penalties, This time, given that this is the first game in the group, that just makes things all the harder.

Who are your favourites for the competition and do you agree that you are some way behind sides like Argentina, Germany, Brazil and Spain?

I think most people would agree that we have fewer outstanding individual talents than sides like those four but I think that if our team approach is right, if we play like a team, as I have already said, then we can cause problems for any opponent.

The important thing in a competition like this is to set aside egoistical concerns so that you function as a team, that’s the only way it works, every player has got to be ready to make his contribution, be it for 90 minutes, or 45 minutes, or even five minutes because in a World Cup, five minutes can prove to be utterly decisive…And my impression is that everyone in our squad has understood this. As for favourites, I would put Brazil, Spain and Germany ahead of the rest…Then you have a number of teams, including Italy, in the second row of the grid. I just hope that we prove to be a big surprise for everybody.”

What way will this Italy line out, what is the team’s basic gameplan?

I think we have shown, both at the European Championships two years ago and at the Confederations Cup, that we are very flexible tactically, that we can change from match to match and, even more importantly, during a match. The coach picks his line-out in relation to our form and the type of opponent, that is obvious. You can go on about 3-5-2 or 4-4-2 or whatever but I think that more than the tactical line-up what really matters is your mental approach, how aggressive you are, how hungry you are…

As for our style of play, it’s simple enough: dominate possession as much as you can and that way, you will control the game, causing problems for your opponents. You can change the tactical lineout as much as you like but the basic principle, that of possession, does not change.

Balotelli is inevitably Italy’s most talked about player. How is he shaping up for Brazil?

Mario seems to me to be very calm. Obviously, he knows that a World Cup represents the ultimate test for a player but he also knows that we are all on his side, ready to help him out, because he, like everyone else, has forged his game to meet the collective requirements.

What do you say to those fans who are sceptical about Italy’s chances?

That we are working our butts off to be ready. The only thing that really matters in football is the daily hard work of preparation. In that sense, the only guarantee that I can give to our fans is that our commitment is 100%.

This is your second World Cup (after South Africa). How are you personally approaching it?

As far as the competition is concerned, we’ve got make up for our flop four years ago, that is clear…It was a fantastic experience to play in a World Cup, even if it unfortunately did not go well but I hope that the Brazil will be different, will be “magical”. We are going to be writing a page of football history and that makes the whole competition very, very special…

There has been a lot of concern expressed about the playing conditions in Brazil. Are you players worried?

Last year, when we played in the Confederations Cup, we were a bit surprised by the conditions. There is no doubt that they will play a much bigger role in these finals than in other tournaments but we are properly prepared for the conditions now and  I am sure that we will suffer much less than last year.