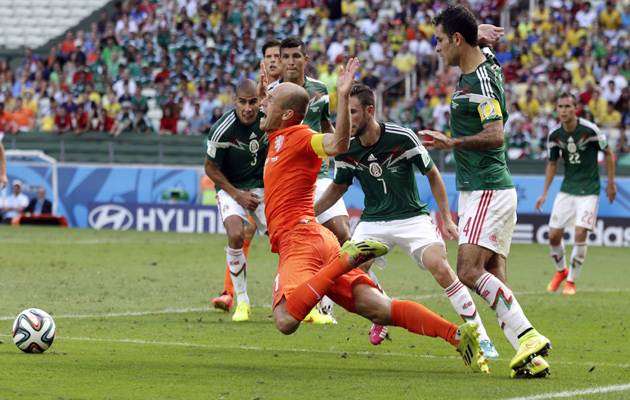 Mexico coach Miguel Herrera was furious with the decision, claiming it was the latest of many bad decisions his side had suffered in Brazil. He even hinted that a conspiracy might be at work.

“Why did FIFA choose a referee from the same confederation as the Netherlands instead of one from South America, Asia or Africa?” he asked.

“The doubtful decisions were always against us. In three matches we had horrible refereeing. The man with the whistle knocked us out.

Rafael Marquez, Mexico skipper and the man whose boot Robben fell over to win the penalty, claims that the forward admitted afterwards to diving.

“I spoke with Robben after the match and he told me that it was not a penalty,” said Marquez.

“He said that the first foul was a penalty and that one was not called.”

Robben, let us be honest here, does have a reputation, and some would argue, a propensity, to go to ground easily. But, give the man his dues, every once in a while he does try and stay on his feet. Although, even he acknowledged that on Sunday he took a dive, although not, he claims, to win the disputed penalty.

“I have to apologise. In the first half I took a dive,” he said.

“The one at the end was a penalty.”

In truth, if you look at the incident (see below) you can perhaps find a middle ground. Robben clearly dives, but, Marquez’s foot does make contact with him. So, yes it is a penalty and yes, Robben dived. Penalty to Holland and a yellow card to Robben. Would a referee ever risk the inevitable scrutiny should he make such a ruling? Probably not.