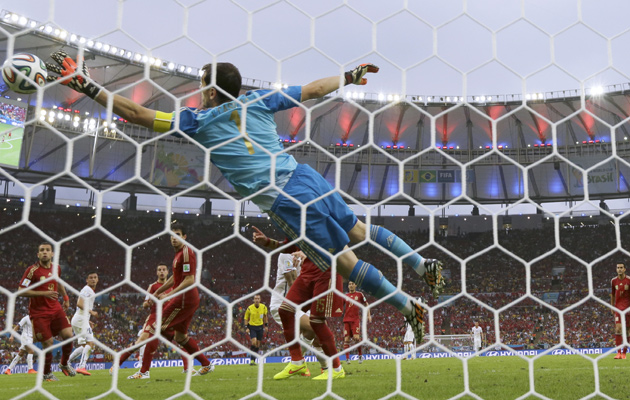 Match overview: Spain’s 5-1 loss to Holland is the heaviest loss suffered by a defending champion at the World Cup.  Chile have never beaten Spain and lost their two previous World Cup meetings.

Key moment: Trailing 1-0, Spain conceded a second that almost put the game beyond their reach. It was the bizarre decision of Iker Casillas to punch the ball, when a catch seemed possible, that led to the decisive second goal.

Man of the match: Charles Aranguiz. Created the first with a wonderful reverse path to Eduardo Vargas and his finish for the second goal was a marvellous piece of improvisation.

Matter of fact: Spain did not score a goal from open play in the tournament. Although several holders of the trophy have been knocked out at the group stages, Spain are the only ones to be the first team to be knocked out of a World Cup.

Talking point: Hard to avoid talk of an end of an era now. The decision to omit Xavi from today’s starting line-up seemed significant and symbolic. He, more than any other player, embodied the tiki-taka style which has brought Spain so much success in recent years.