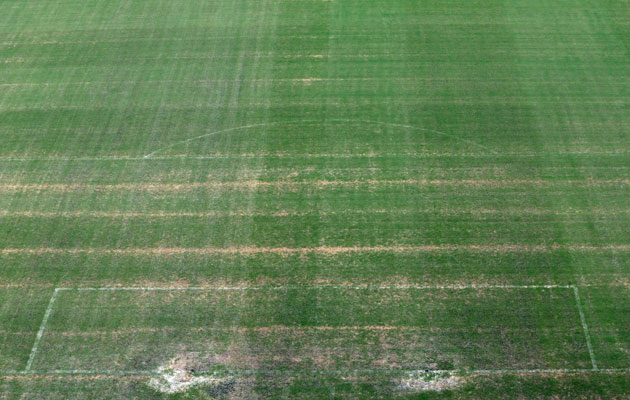 The groundsman responsible for the maintaining the pitch at the Manaus stadium has admitted that the pitch is in poor shape.

“Frankly, Manaus is in bad shape,” said Carlos Botella, head groundsman for the Royal Verd company which is responsible for the turf at Manaus.

“The maintenance has been complicated.”

Botella added: “There are no roads. All the machinery and materials had to be brought by ship. There was no fertilizer and no seeds.

“Now we have put fertilizer down. We will increase the fertilizing process with biostimulants and seeds to try to get the most out of the grass.”

While the groundsman is piling on the fertilizer in the hope of reviving the moribund surface, FIFA has blamed the state of the pitch on the use of too much…fertilizer.

A FIFA source said the problems had been caused by “excessive use of fertiliser” but added that the issue was “largely cosmetic” and there is no threat to the Group D game not taking place.

“The pitch in Manaus has been undergoing treatment in preparation for the World Cup. Over the last three months, mitigation procedures have been put in place and there continues to be significant improvement,” said a FIFA spokesman.

The stadium, which holds 39,118 people, was only constructed last year.

Although, as Gary Lineker points out, they have had seven years to think about the logistics required to produce a football pitch.

Groundsman 'Frankly, Manaus is in bad shape. The field will not be in good condition'. They've only had 7 years to prepare it, though.