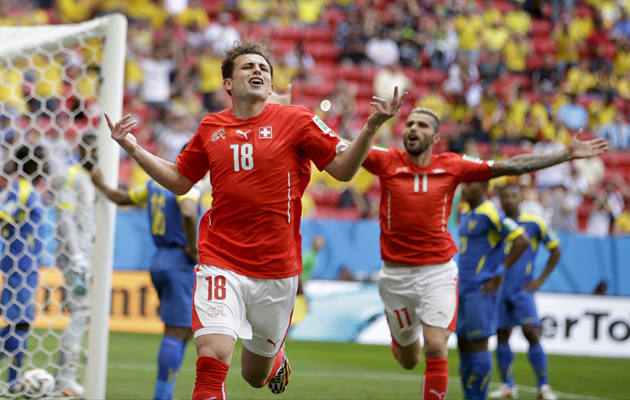 Match overview: This is the first time Switzerland and Ecuador have met each other in an international match, competitive or otherwise.

Key moment: Switzerland coach Ottmar Hitzfeld introduced Admir Mehmedi immediately after the break and within three minutes he had headed his team level. A word of praise too for the referee,  Ravshan Irmatov, who could have blown for a free-kick in the build up to the winning goal, but allowed play to continue.

Man of the match: Ricardo Rodriguez. Provided the crosses for both Switzerland goals – the first in particular was a pass of pinpoint accuracy.

Matter of fact: Valencia’s header from a Walter Ayovi free-kick was his fifth goal in successive games for his country. It was all to no avail, though, as Switzerland recorded their first ever win at the World Cup against South American opposition.

Talking point: Switzerland look set fair after this win. Logically, the winner of this match should accompany France into the knockout stages.