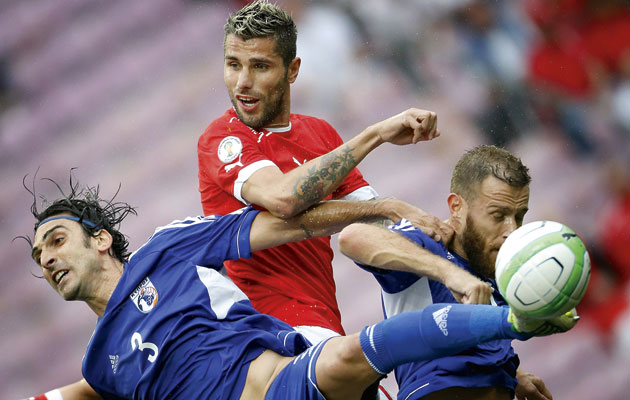 Switzerland almost invariably play with a 4-2-3-1 system. In goal, Diego Benaglio has been the first choice for the last six years with Yann Sommer a distant second. Stefan Lichtsteiner of Juventus on the right and Ricardo Rodriguez on the left are the two full-backs and both like to  get forward.

The central defensive pairing is less clear cut. Philippe Senderos and Johan Djourou both have experience in Europe’s top leagues but both have suffered form and injury problems over the last couple of years; in  the key matches against Norway and Albania last autumn, Hitzfeld preferred youngster Fabian Schar alongside Steve Von Bergen.

Team captain Gokhan Inler and Valon Behrami play holding roles in front of the back four. Both play for Napoli although media reports suggest their relationship  has become strained recently. Blerim Dzemaili, also of Napoli, is another option  in that area.

Ahead of them, Xherdan Shaqiri is the creative inspiration on the right of the attack. He can run with the ball and likes to cut inside and shoot Arjen Robben-style. Granit Xhaka distributes the ball from the centre and Valentin Stocker is another pacy, tricky player on the left.

That leaves the centre-forward spot, where Switzerland have plenty of promising youngsters such as Haris Seferovic, Admir Mehmedi, Josip Drmic and Mario Gavranovic but no automatic first choice.  On current form, Drmic might just get the nod thanks to a free-scoring season in  the Bundesliga with Nuremberg, although Mehmedi is another option.

There are plenty of options at free-kicks where Schar, Shaqiri and Inler all pack a powerful shot.

Hitzfeld has not deviated from his preferred 4-2-3-1 format. One alternative scenario would be the option of playing Shaqiri as a “false nine”.

Gelson Fernandes is often brought on when Switzerland are leading to beef up the centre of the midfield.

Christian Benitez, who tragically died last year, was a player Rueda could ill-afford to lose – in both an emotional sense  (he was hugely popular in the squad) and a tactical one, as his talent and versatility helped balance out the coach’s system. Benitez was the country’s most-respected goalscorer and was quick enough to play on the shoulder of the last defender or to tuck back and form part  of the midfield block. He would take it in turns with Felipe Caicedo to drop deep, presenting opposing defences with different challenges while ensuring the team stayed relatively solid within the framework of their 4-4-2 formation.

There is no exact replacement for such a complete player. If a quick attacker such as Enner Valencia is used, then the team can look very open and the vulnerability of the defence exposed. Another option might be to move Antonio Valencia inside, thus creating an opening on the wing for the jet-heeled Renato Ibarra or maybe Joao Rojas. This, however, would be taking the team’s best player away from the role in which he is  most effective.

Otherwise, the structure of the side looks relatively settled. Juan Carlos Paredes  and Walter Ayovi are an adventurous  pair of full-backs in a team which will seek  to counter at pace. Segundo Castillo  will hold the fort in central midfield while Christian Noboa, with his range of passing, will look to get the ball moving quickly to  the wingers.

It is here, on rapid transitions, if Jefferson Montero or Valencia can get one-on-one with the opposing full-backs, that Ecuador can do some serious damage.

Ecuador rarely vary from the 4-4-2 template. However, the death of Benitez has left them with a huge gap to fill, and the twin strike force of Caicedo and Enner Valencia may struggle.

One possible option would be a switch  to a 4-5-1 formation, bringing in an extra midfielder, such as the veteran Edison Mendez. However, there is a danger  that such a move would highlight Ecuador’s lack of pace in and around the penalty box.