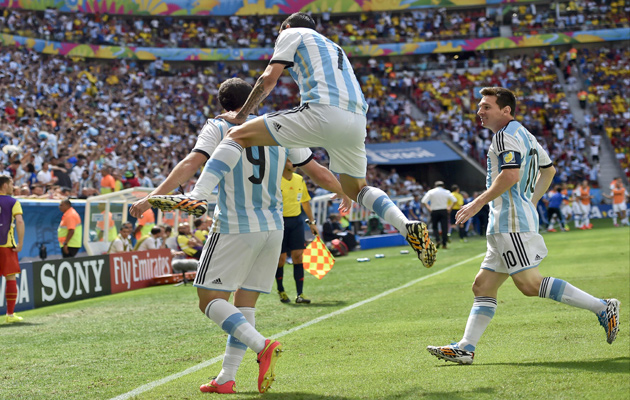 Holland have reached their second successive World Cup semi-final following a dramatic penalty shoot-out victory over Costa Rica in Salvador after the match had ended goalless after 120 minutes. Substitute keeper Tim Krul was Holland’s hero, saving two spot-kicks after being brought on to replace Jasper Cillessen in the final minute of extra time.

It’s a sad end to Costa Rica’s amazing run at the 2014 World Cup. They defended heroically in extra time, but it was a stroke of genius by Holland coach Louis Van Gaal to swap keepers for the shoot-out. The Ticos were unsettled by the decision to withdraw Cillessen, when they were hoping that their own keeper, Keylor Navas, would be the shoot-out hero.

After 120 minutes, we’ve got a penalty shoot-out. A thrilling second period of extra time, with chances for both side to win it. Wesley Sneijder hit the bar for Holland, Costa Rica substitute Marcos Urena was denied by Jasper Cillessen.

We’re heading into extra time following a stalemate in Salvador. Robin Van Persie missed a glorious chance to settle things in the 90th minute, but he somehow missed failed to connect with Sneijder’s. Then Yeltsin Tejeda cleared off the line as Costa Rica clung on in dramatic fashion.

There have been some great games in Salvador at this World Cup – Germany-Portugal, Belgium-USA – but this hasn’t been one of them so far. It’s been cagey; the Dutch have been happy to sit back and catch Costa Rica on the break. Arjen Robben has been Holland’s biggest threat but it’s still goalless.

Costa Rica keeper Keylor Navas produces another good save to tip away an Arjen Robben free-kick. Holland getting closer.

Holland look lively early on, playing a 3-4-3 when they have the ball, and 5-2-3 without it. Arjen Robben in particular is looking a threat. It could be a long night for Costa Rica.

Holland coach Louis Van Gaal has brought an extra forward into the line-up to face Costa Rica. Memphis Depay starts in a front three as Holland go on the attack with a 3-4-3 formation. It looks like Dirk Kuyt will play on the right of midfield.

Costa Rica have brought in defender Johnny Acosta into their back five, in place of Giancarlo Gonzalez.

It’s all over in Brasilia, Argentina are in the semi-finals thanks to a 1-0 victory over Belgium. Gonzalo Higuain’s early strike, his first goal of the tournament, proved enough. Lionel Messi almost added a second when clearn through on goal in injury time, but Thibaut Courtois saved brilliantly. Argentina now face Holland or Costa Rica in Sao Paulo on Wednesday.

Argentina take an early lead! Angel Di Maria tried to play in Pablo Zabaleta on the overlap. The ball bounced off a Belgian defender into the path of Gonzalo Higauin who smashed a volley past Thibaut Courtois.