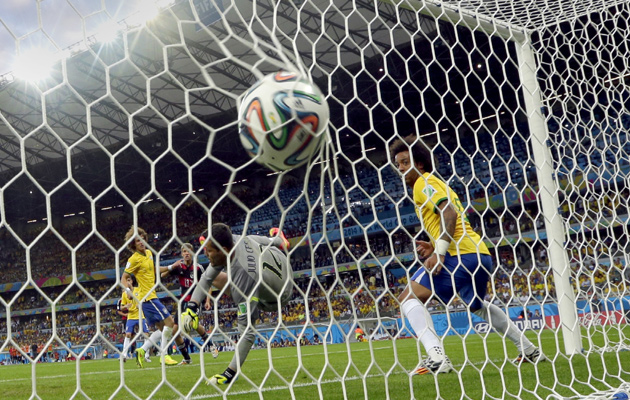 That’s it. All over in Belo Horizonte. One of the most extraordinary semi-finals in World Cup history. Brazil have suffered the worst semi-final loss in the history of the competition. The 7-1 defeat is also their worst ever loss, eclipsing the 6-0 to Uruguay in 1920.

Boos are ringing around the Estadio Mineirao stadium. An incredible result. Where Brazilian football goes from here is anybody’s guess.

Oscar pulls one back for Brazil.

Great strike by Andre Schurrle, crashing a shot off the underside of the bar. You didn’t think it could get any worse for Brazil. It just did.

Paulinho and Ramires are on for Fernandinho and Hulk. Brazil have closed off the midfield and Manuel Neuer has been forced to make two great saves.

What an extraordinary 45 minutes of football. To put it in context, Brazil have not lost a competitive game on home soil since 1975. Then, in the space of 18 minutes, they conceded five goals to Germany. Boos are ringing around the Estadio Mineirao stadium. The country went into mourning for Neymar’s injury. Lord knows what will happen know.

BRAZIL HAVE STOPPED DEFENDING. Khedira unmarked on the edge of the area.

THIS IS INCREDIBLE! Unbelievable, a second for Kroos.

Extraordinary! Kroos shot at the far post after Lahm’s cross was missed. 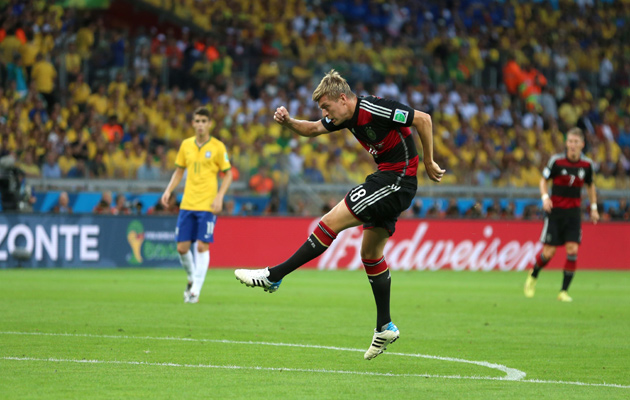 Miroslav Klose at the second attempt after Julio Cesar had saved his first shot. Great run from Toni Kroos to set up Klose, who has now set a new World Cup scoring record.

Brazil are unchanged from the side that defeated France in the quarter-finals so Miroslav Klose retains his pace up front at the expense of Mario Gotze.

There are three changes for Brazil, with Dante in for the suspended Thiago Silva and Bernard replacing Neymar. Luis Gustavo returns to the side after being suspended for the quarter-final win over Colombia.

If anyone knows World Cups it’s legendary football writer Brian Glanville, He attended his first tournament in Sweden in 1958 and he’s still going strong more than 50 years later. Here he delivers his verdict on Brazil 2014.

Jumping the gun on Luis Suarez…

Gone, but not forgotten, Luis Suarez was the snarling pantomime villain of Brazil 2014. His national coach, Uruguay’s Oscar Tabarez, has a possible theory to explain why the striker might have lost his mind during that fateful encounter with Giorgio Chiellini.

A choice of Rios: World Cup or World Series of Poker?

The climax of the World Cup coincides with the holy grail of all poker players, the World Series of Poker Main Event. For a poker playing football fan, that presents quite a dilemma.

While the focus is obviously on Brazil at the moment, the football world is also mourning the death of Alfredo Di Stefano, who passed away on Monday after suffering a heart-attack.

World Soccer’s Keir Radnedge has penned a tribute to a player many regard as the best footballer of all time.

And then there were four…Brazil 2014 is approaching its climax and tonight hosts the first of the semi-finals with Brazil facing Germany in Belo Horizonte.

Brazil are where they expected to be, although following the suspension of Thiago Silva and the tournament-ending injury to Neymar, they have paid a heavy price to get here.

They face Joachim Low’s Germany side who, having lost at this stage in 20010 and 2006, will be keen to go one better this time around.