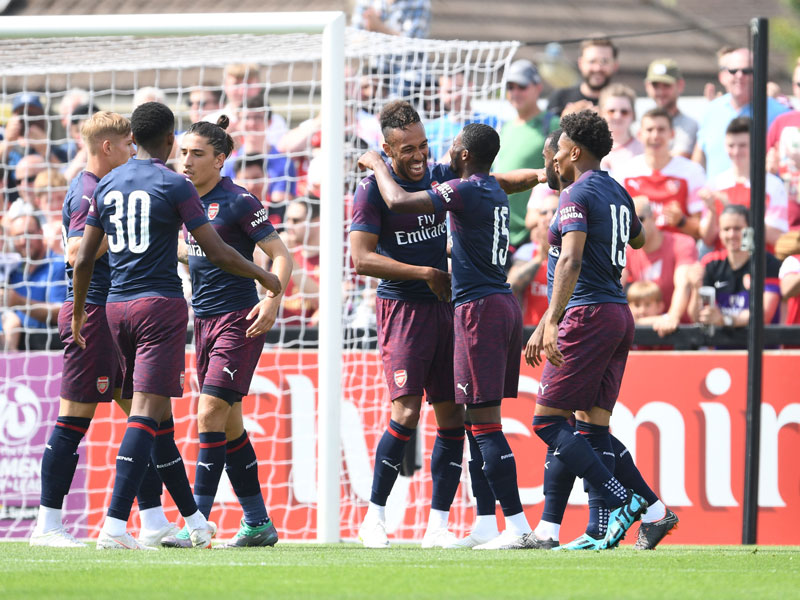 With the World Cup behind us, the Premier League is fast approaching and this year there are a whole new range of new kits for us to look at. In this piece we take a look at each club and their kits for the upcoming season.

Which one is your favourite? How do they compare to some of the World Cup kits?

Arsenal’s home kit is what you would expect with its classic red and white design. However their away kit is striking indeed and it does have a similar look to it as the current Paris Saint Germain strip. Unai Emery of course came over from the French side.

📸 Check out the first pics of @aaronramsey, @MesutOzil1088 and @Aubameyang7 in our new @pumafootball away kit. Get yours – plus a free £10 gift card – here 👉 https://t.co/sWawsTub6l pic.twitter.com/Lm5OVjiQE2

Bournemouth stick to simple designs in 2018 with red and black for their home kit and then white with blue shorts as the away strip.

Introducing our new @UmbroUK home kit for the 2018/19 season.

Brighton had their kit once again designed by Nike this year. The home strip looks largely the same but the way is green instead of yellow in 2018.

Burnley’s kit looks similar to their 2017 strip aside from the large sponsor logo in the middle of it. Away kit to come.

Drop a like if you’re rating Burnley’s new away kit 🔥🔥 pic.twitter.com/epK0MalZfy

THIRD KIT | Burnley Football Club is proud to announce that the clubs third kit will make its debut tonight, in European competition against Aberdeen, as the Clarets take their first steps on their Europa League adventure…

#CardiffCity is delighted to unveil its new @adidasuk home strip for the upcoming @premierleague campaign.

Widely thought to be one of the best looking kits for the new season, Nike added red and white lines to Chelsea’s classic blue design. Away kit to come.

The stage is lit.

Introducing our new @nikefootball away kit!

Crystal Palace stuck with their red and blue design for their home strip and introduced a white away kit with red and blue lines going across the front.

Aside from the design on the sleeves, Everton’s kit looks largely the same as last year. Away kit to come.

After their promotion, Fulham introduced a great looking black and white kit that has received praise everywhere. Their away kit however has received mixed reviews. We will update this page with a picture of that soon.

Due to a kit clash with @SpursOfficial, we’ll be wearing red this afternoon. 🔴#TOTFUL pic.twitter.com/nNBx0Omhyh

Huddersfield stuck with their blue and white strip for the new season and their alternative kit will have many confused with Bournemouth’s home kit.

Harry Maguire and Jamie Vardy will return to Leicester to see a new kit designed by Adidas. The home blue version does not look very different, but the grey and orange on the away kit is striking indeed.

What do you think? pic.twitter.com/22lDNMEGC3

Liverpool have stuck with a simple red home kit, but have gone outside of the box for the away kit. Purple with orange accents sure is brash and could be a Marmite strip. You either love it or you hate it.

Wearing Red at Anfield and making the dreams of millions come true.

Wear the Liver Bird proudly on your chest.

Fresh off their Premier League win last year, City have kept their design pretty similar. Away kit is coming soon.

Jose Mourinho’s men will wear a kit slightly different from last years, with the main difference being the black design at the bottom of the shirts. Away kit coming soon. The black kit below is their third kit.

With Manchester United still yet to release their away kit for this season would this be what you would like to see as the kit? What are your opinions on this👀🔴🤷‍♂️ pic.twitter.com/dl43IgIYvK

Newcastle stuck with the classic white and black stripes in their home jersey whilst going for more outlandish design for their away strip.

Our new signing in our new @pumafootball home shirt 😍 pic.twitter.com/phnfLSRxtf

Not a lot to talk about here as their kit is pretty much the same as last year, only with more red and white stripes. The away kit goes for a yellow and blue combination.

Currently not on sale here yet, Tottenham’s kit was designed by Nike and their away version looks similar to France’s World Cup winning kit.

Traditionally just a yellow jersey, Watford instead introduced some black stripes to the mix in their home kit. Away kit to come.

🛒 | The Hornets Shop will be open this Sunday June 24, so come down to The Vic and get your new 2018/19 #watfordfc home kit by @adidasUK 💪 #HereToCreate pic.twitter.com/XzjFM39dlf

West Ham have several new signings and a new home and away kit too. The home version features the classic claret and blue colour-way, whilst the away features blue and yellow shirts and socks.

Introducing our Home & Away kits for the 2018/19 season… #ImForever pic.twitter.com/o4wrfg1ZaT

Wolves went for the usual orange home jersey and a white away kit.

We'd also like to introduce our @adidasUK 2018/19 @premierleague away kit.#OldGoldNewChallenge