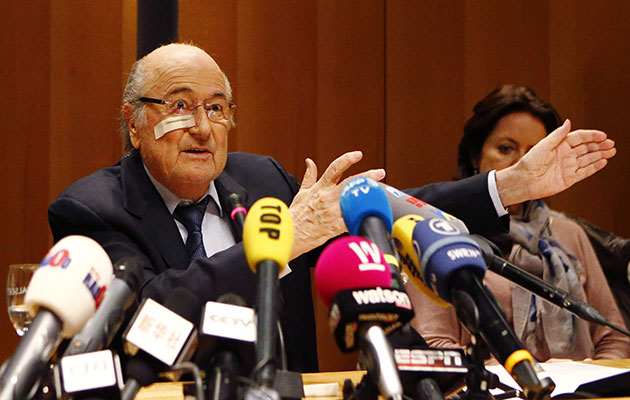 Sepp Blatter has complained that he has become a “punching ball” at Fifa and that that he felt sorry for the scandal-engulfed organisation, after his suspension from football was announced.

“As president of Fifa I am this punching ball. I am sorry for Fifa,” Blatter told journalists in Zurich after a Fifa ethics court banned him from football for eight years.

Blatter confirmed that he would launch an appeal against the suspension, before taking his case to the Court of Arbitration for Sport in Lausanne.

Fifa President Blatter and Uefa president Michel Platini were both thrown out of the sport for conflict of interest in a 2 million Swiss Francs payment deal that is also the subject of a criminal investigation in Switzerland.

Blatter, accompanied by his daughter Corinne, claimed that he was a victim of the long-running saga and that today was a bad day for Fifa.

“To say that it is a good day for me or for Fifa, it would be totally wrong” Blatter said.

“You can identify me as an optimist. Together with a Swiss lawyer, we thought that we had convinced the panel, with Mr Eckert in the chair, about the situation with the payment. We thought that we were in a situation that was clear, with a clean sheet.

“We had an oral contract, a gentleman’s agreement. This was made in 1998 after the World Cup. What astonished me now when I talk about the decision today is that they deny the existence of such an agreement. This agreement was confirmed by two meetings. We have the proof that this agreement existed.

“Therefore the 2m Swiss francs paid to Platini went through the finance committee, the executive committee and was done in good terms. This is a donation. This is a gift. We avoided the issue of corruption. We did this because this arrangement was in the Fifa books. You can have oral contracts. Once again we go to the appeal committee. We go to Cas, the court of arbitration for sport. There might have been an administrative error, but this was nothing to do with the ethics. This cannot be proven. If it cannot be proven, then it cannot be guilty.”

Blatter had protested his innocence in a letter to all 209 Fifa members in which he compared the process to the Spanish inquisition. On Monday, he continued to defend himself, this time making reference to Nelson Mandela.

“Mr Mandela was talking about humanity. Humanity needs no other significance than to respect each other and I say that to celebrate humanity through football was created by this great humanist,” he said.

“I will fight. I will fight for me and I will fight for Fifa. Suspended for what? I spoke with my lawyer this morning and we were not surprised that the notification was made first to the media. This committee has no right to go against the president of Fifa. The president can only be removed by the congress. Even suspended, I am still the president. I regret, but I am not ashamed.

“Human beings needs to be respected. It has created a lot of collateral damage in the families. My family was mocked. I regret I am this punching bag. Fifa is still working well, I congratulate Barcelona to winning the Club World Cup. I am a man of principles. These principles are: never take money that is not earned. Secondly, pay your debts. I’ll be back”

Joseph ‘Sepp’ Blatter was handpicked for FIFA while a marketing executive for Swiss timing company Longines. The man who ‘spotted’ him was Horst Dassler, scion of the family which turned Adidas from a German footware company into a worldwide brand. Dassler recommended Blatter to the newly-elected president of FIFA, Joao Havelange, to fill the fill the role of development director. The rest is history.

Education: College de Sion and St Maurice; University of Lausanne: Bachelor of business administration and economics from the Faculty of Law 1962

1970: Becomes director sports timing and public relations for Longines, involved in organisation of the 1972 and 1976 Olympics Games

2015 – May 29: Re-elected as FIFA president. June 2: Announces a decision to “lay down my mandate” after generating a series of reform proposals. August 3: Resigns as a member of the International Olympic Committee. September 24: Subjected to a criminal investigation by the Office of the Attorney-General over allegations of financial misconduct in office. October 8: Suspended for 90 days by the FIFA ethics committee pending an investigation into allegations of breaches of the Code of Ethics. December 17: Protests his innocence before ethics judge Hans-Joachim Eckert. December 21: Banned from football for eight years and fined SFr50,000.