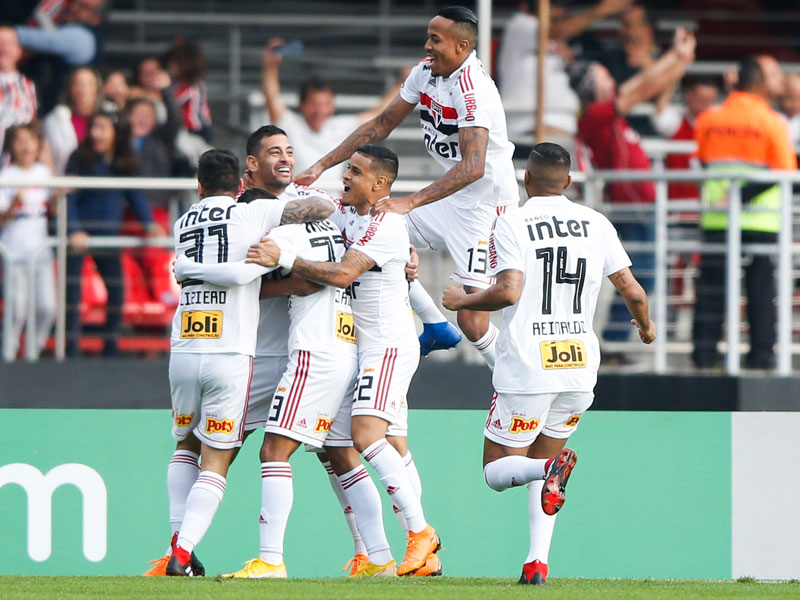 The Brazilian Championship reached the half way stage at the weekend, with the table looking very different from this time last year.

In 2017 Corinthians had the title all but sown up after 19 of the 38 rounds. The 2018 version offers the prospect of a much more exciting home straight.

Flamengo, leaders until two weeks ago, have now dropped to third, a point behind Internacional, who claimed the lead for a few hours on Sunday until Sao Paulo won it back with a win in the late game. Sao Paulo have a three point advantage, and the chasing pack includes not only Internacional and Flamengo, but also Gremio, plus Atletico Mineiro and Palmeiras. Just eight points separate the first from the last in what has become a six horse race.

Extra spice is thrown in firstly by the fact that all six are huge clubs, with mass followings. And also by the pre-season consensus that neither Sao Paulo nor Internacional were likely to be among this year’s main contenders. There is, then, a blend of competitive balance, of tradition and of surprise that should make for a grandstand second half of the campaign.

So why does it feel so underwhelming?

On explanation lies in the effects of globalisation, the way that the domestic Brazilian game has been stripped of so much of its talent. This has had a clear effect on the quality of the individual players and of the collective ideas. Once the World Cup was over and domestic football resumed, 1970 great Tostao observed that “watching games in the Brazilian Championship, the differences [in comparison with the action in Russia] are grand. Individually, the level in Brazil is weak…. And there are many bad habits in terms of playing style, accumulated over the course of years, such as the enormous spaces between sectors of the team, centre backs lying deep on the edge of their area, an excess of long passes to team-mates who are marked, crosses struck hopefully into the box, and many other details.”

But there is more. The way that the calendar works takes a huge toll on the league, which should be the country’s flagship domestic campaign.

The Brazilian Championship is shoe-horned into the season with little thought for how it might best be organised. The existence of the State Championships (one for each of the country’s 27 states) immediately before dissipates the ‘big kick off’ effect. The action starts and then has to stop again and pause for the World Cup (the same will be true next year for the Copa America), halting any momentum which has been built up in the early rounds.  And the league ends up paying the price for an excess of matches.

August is especially cruel. The knock out stages of the Copa Libertadores, South America’s Champions League, get underway. Six Brazilian clubs are still alive in this year’s competition.  And there is also the domestic cup, where the quarter finals have just been completed – meaning that eight teams (some of them also in the Libertadores) have just played another two high profile matches.

The games come thick and fast, and coaches find themselves obliged to prioritise. Some of the sides in contention for the league have played a number of games with reserve or understrength line ups, keeping their gunpowder fresh for the knock out competitions. Brazil is one of the very few places in the world where the domestic cup is taking precedence over winning the league title – and given the comparison of effort needed to win them, that cannot be right.