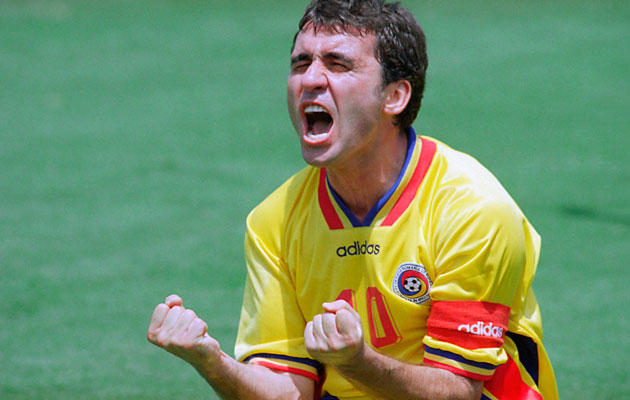 Each World Cup leaves you with unique abiding memories, those stand out tournament moments that will live with you forever. Whether it’s an amazing goal, the emergence of a new talent, dramatic incidents, classic images, or even soundbites of commentary, they are moments you will fondly reflect upon in years to come.

For the younger generation it’s these special moments that provide inspiration for tomorrow’s aspiring footballer. Moments that will be relived and played out over and over again in the local park, street, or whatever happens to be their hallowed turf at the time. Put the new build stadiums and improved transport infrastructure to one side, you have the true legacy of a World Cup and you can’t put a price on that.

USA ’94 delivered many such moments. From the terribly sad shooting of Antonio Escobar, to Maradona’s eye popping and vein bulging goal celebration that led to a desperate fall from grace of arguably the greatest player that’s ever played the game. How about Jack Charlton and John Aldridge losing it on the touchline in the searing heat of Orlando. Remember Tab Ramos receiving the full force of Leonardo’s elbow? And what about a certain divine ponytail? Roberto Baggio almost single-handedly dragging Italy into the final just as Maradona had done with Argentina eight years previous in Mexico 86.

Growing up in the late 80’s & early 90’s, when global football coverage wasn’t quite what it is today, the World Cup really felt like Xmas had come early. That patient four year wait and the chance to expand my footballing mind, to experience more than just the English game, and to soak up the creative artistry from the masters of the global game was truly an exciting prospect.

One of my abiding memories from USA ‘94 was the emergence (in my world anyway) of Gheorghe Hagi and ‘that’ Romanian team as a truly world class side. Hagi’s classic strike against Colombia at the Rose Bowl in Pasadena in the group stage was one of those ‘moments’ that I vividly recall; a moment that reflected the true genius of a player that lit up USA ‘94. Nicknamed ‘Maradona of the Carpathians’, or in his homeland simply ‘The King’, Hagi was one of a few players of his generation that could leave you transfixed by his brilliance.

If you watch back old video clips of Hagi (and there are plenty of them), that comparison with Maradona isn’t wide of the mark. In fact the likeness in playing style and technical ability is uncanny. Hagi, along with another star of USA ’94, Hristo Stoichkov, probably had the best left foot in world football at the time. But what really set Hagi apart was his ‘weaker’ right foot (and I use that term loosely) which was better than most naturally right footed players! His unique ability to shift the ball with consummate ease to both sides seemingly left defenders in a hypnotic state and often on the seat of their pants. The ability to create space for himself and others the way he did was a pleasure to behold, but Hagi also had this astonishing habit of regularly scoring great goals from long range. A real No.10!

Whilst the mercurial Hagi was the fulcrum of the Romanian side, he was also surrounded by a golden generation of talent that saw Romania develop into one of the great attacking teams of its time. With players like Hagi, Popescu, Munteanu, Dumitrescu, Petrescu, Belodedici, Raducioiu, and Moldovan, the list practically reads as ‘all-time greatest XI’, and that class of ‘94 is rightly considered as the best international side in the history of Romanian football.

After winning their group, Romania dispatched of Argentina (albeit Maradona-less) in the last sixteen, before going out to Sweden in the quarter finals via the lottery of a penalty shoot-out. A moment that still haunts Hagi to this day, and if the shoot-out had fallen in favour of the Eastern European’s then who knows what might have become of Romania’s greatest ever national team.

A group stage exit at France ’98 four years later was Romania’s last appearance at a World Cup finals and signalled the end of an era. Those household names that inspired so many young footballers, not least from Romania, seem to have all but dried up. Since then, the future of Romanian football at international level has looked bleak for some time.

Fast forward sixteen years and Romania’s favourite footballing son has returned to his roots, embarking on a new youth development project that has the longer term development of Romanian domestic football and the National team’s at its core. In scoping the project, Hagi identified not only a need for an improved youth development programme, but a strategy that provides ‘real’ exit route opportunities for young players to be able to progress onto senior professional club football after they have left an academy set up.

Hagi has described Romanian clubs approach to football on the domestic stage as impatient, and their ‘success now’ strategy as damaging to the growth and development of the countries younger players.  Hagi’s philosophy is instead focussed purely on the longer term.

The vision comes in two parts. Firstly the ‘Gheorghe Hagi Football Academy’, which was set up in 2009, aims to nurture and develop talented young players and provide them with a platform for their progression into professional football and ultimately the national team. Easily said, but not so easily done. Hagi has reportedly invested 10 million euros into creating an infrastructure and training facility based in his birth town of Ovidiu near Constanta.  With eight state of the art pitches, purpose built accommodation and catering facilities for the players, the set-up is geared to support the development of young players not only from the region but from across the country. The academy currently receives an intake of approximately 280 players across all age groups, and 66 of those take part in their football, accommodation and schools programme. Within three years of operation the academy was already regarded as the best youth development programme in Romania.

The second part of the vision was to establish a football club that would truly give a platform for young players to ply their trade in senior football. A club that would show the patience needed to allow the emerging talent displayed by young players at the academy to blossom at senior level.

In 2009, Viitorul Constanta football club was established as part of the project also known as ‘The Future Football Club’. Back then Viitorul had taken over the league spot that was previously held by local side CS Ovidiu, and replaced them in the Romanian III Liga for the 2009/10 season.

Viitorul immediately achieved two back to back promotions and now take their place in the top flight for a third consecutive season alongside the more established and illustrious names of Romanian domestic football. All this was achieved with the philosophy of embedding academy graduates into the first team.

Approximately 70% of the current Viitorul squad is made up of players that have graduated from the academy base in Ovidiu. That alone is an impressive statistic, and to survive in any domestic top flight league on that principle is commendable. But Hagi’s vision goes beyond the boundaries of the domestic game, and the academy has already provided nearly fifty players to the Romanian national team set up (from youth teams and up to the seniors).

To put this into context, the average age of the Viitorul squad is approximately 23. Cristian Gavra (21) and Adrian Putanu (20) are established first team players who made their debuts for Viitorul at ages 17 and 18 respectively. More recently Cristan Manea (17) and Florian Tanase (19) (also first team players) made their full international debuts in 2014. Furthermore all other academy graduates currently in the Viitorul first team squad have represented Romania at either U17, U19 and U21 level (or all).

Gabriel Iancu (20) is another example of the standard of talent that has graduated from Hagi’s academy and subsequently the Viitorul first team. Back in 2011, aged just 17, Iancu was already a Viitorul regular and scored 10 goals in 30 appearances. That form had scouts from across Europe scrambling for their notebooks, and in March 2012 he was invited to Ajax Amsterdam for a sustained trial period. On returning to Romania, Iancu was quickly snapped up by Steaua Bucharest in Dec 2012 with the offer of a 5 year contract. Whilst the transfer fee was ‘undisclosed’, Steaua’s valuation of the youngster was illustrated by the £21 million buyout clause inserted into the contract.

The model looks great on paper and so far it’s clearly delivered some early success stories. But in the longer term could Hagi’s vision be flawed?

Players currently exit the academy at age 19, and with no reserve team or U21 team to support the first team set up, Viitorul Constanta will only be able offer a restricted number of places in their squad to the graduating cohort each season. Unless they regularly sell or release existing players, there could be a growing number of academy graduates without an exit route.

Players will enter the free market with limited or no senior first team experience, reduced financial value, or worse still no value at all. Hagi’s long term business plan is built on selling players and reinvesting transfer fees to fund the academy and the associated costs of running a club in Liga I.

This puts Viitorul Constanta as a club in a uniquely strange position. The club is effectively nothing more than a shop window, and no coach or manager will be able to build a team for the long term (as is the usual premise). The key deliverable here will be ‘work with what you’ve got and stay up’.

Behind the scenes, the pressure to keep the conveyor belt of talent running may cause the Hagi model a few problems in the future, especially if the transfer fees don’t come in at the level required to cover the projects running costs.

Nevertheless, Hagi’s project is an exciting one, and whilst it will take some time to gauge the long term successes, the early signs look promising. Young players gaining regular first team football in the domestic top flight can only aid their footballing education and development, and will in turn go some way to enhance the future foundations of the national team.

Romania may never again reach the heights of ‘that’ great team from the ‘90’s, but qualifying for a World Cup has to be the first step along that road. Russia 2018 could provide the first opportunity to measure progress on that front, but realistically it might not be until 2022 in Qatar or even 2026 before the foundations being laid now start to bear fruit for Romania at international level.

Either way Hagi is on the verge of creating a 2nd legacy in a career that has already given so much to Romanian football and inspired so many. Watch this space, and keep an eye out for Viitorul Constanta in the years to come.