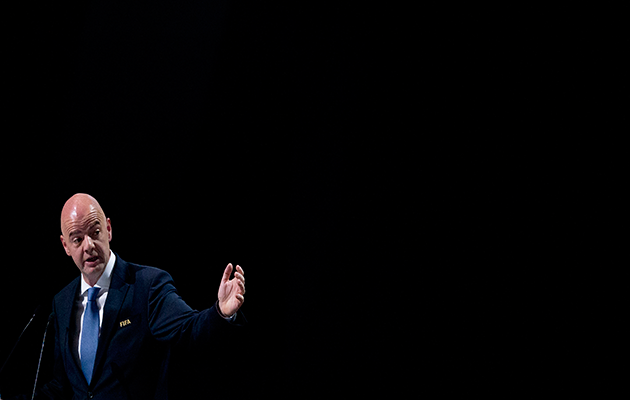 FIFA president Gianni Infantino has reiterated his support for a 48-team World Cup, arguing it gives “more of a chance to more teams”.

Infantino, 46, was elected to succeed the disgraced Sepp Blatter as FIFA president earlier this year, and he appears determined to create his own legacy.

“We can consider a World Cup of 48 teams which would in fact be a 32-team format because we have seen that the ideal format is 32 teams,” Infantino told AFP.

“The idea would be that the best 16 teams in qualifying would qualify directly for the group phase.”

“This gives more chances for more teams. Furthermore, there would be no impact on the football calendar because these play-off matches would be played instead of friendlies before the World Cup,” he added.

“From the point of view of the promotion of football, there would be ’16 finals’ before the real start of the group phase, real matches taking place to determine the 16 teams.”

Infantino said that the projected increase to 48 teams “is certainly going to be discussed on October 13 and 14 when the next FIFA Council meets”.

“It’s a project, it’s an idea just as the World Cup with 40 teams is already on the table with groups of four or five teams.

“We will certainly make a decision next year. We need to see what the impact for football at international level is going to be.”

The suggestion to widen the World Cup to 48 countries will not be to everyone’s liking.

The Euro 2016 finals, which featured 24 teams in a month-long tournament with just eight countries being eliminated at the end of the first stage, were criticised for what many perceived to be a dilution of overall quality and the spawning of too many dead rubber matches.

Infantino believes a 48-team World Cup would represent “a high sporting level because from each play-off the best teams would qualify.

“People talk a lot about a decline in the standard but in my opinion the quality of the Euros was not less good, on the contrary. There were teams who you could not imagine could be so strong and the level was very high,” he added.