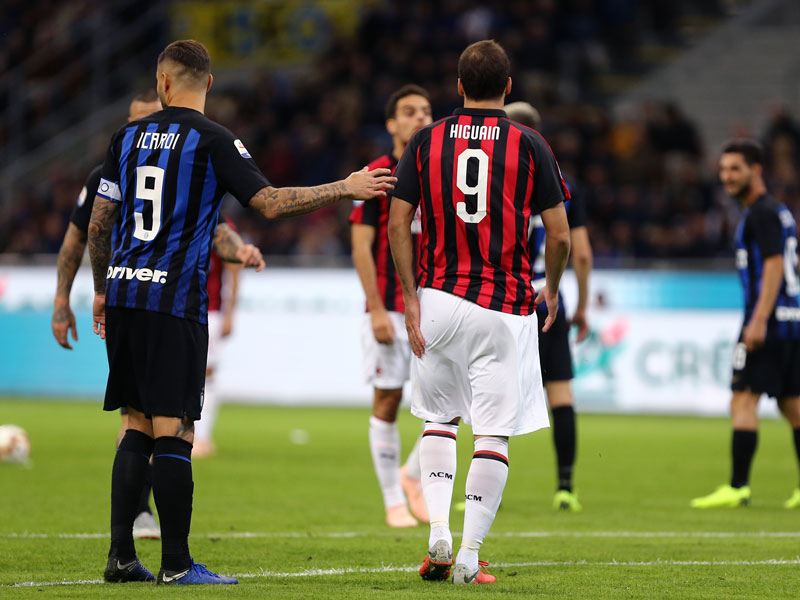 Paddy Agnew’s Notes From Italy: Both Inter And AC Milan At Mercy Of Argentine Forwards

Don’t cry for me, Argentina – by a weird co-incidence, both AC Milan and Inter Milan, the footballing pride of Italy’s business capital, currently find themselves at a “delicate” moment with their respective, iconic Argentine centre forwards, Gonzalo Higuain of AC Milan and Mauro Icardi of Inter.
As AC Milan prepare for Wednesday’s Italian Super Cup final in Jeddah, Saudi Arabia and Inter prepare for the restart of the Serie A programme with a home game against Sassuolo on Saturday night, both clubs find themselves involved in potentially difficult contract negotiations with their two star strikers.
The thing is, of course, that these two are not just any old squad player. Both, in their different ways, are billed as the club’s Main Man, the standard bearer who will do for them what Cristiano Ronaldo is currently doing for  champions Juventus. At their best, both are devastatingly effective goal scorers.
With Inter since 2013, Icardi has scored 109 league goals for them, a strike rate that has not surprisingly earned him the captain’s armband. Time and again in key matches, Icardi has seemed to lie dormant, curled up like a serpent in the sun only to suddenly explode into life and score the goal that wins the day.
His compatriot Higuain has only been at AC Milan since this summer when the arrival of Ronaldo at Juventus prompted the Old Lady to offload him to Milan on a €16 million dollar loan payment with a €36 million dollar buy out clause attached. As Milan, under the US Elliot ownership, attempt to win back a seat at the top table of world football, Higuain was seen as a key figure to lead the charge.
Problem is, after a good start, Higuain by his own high standards has recently proved disappointing. So far, he has scored six league goals this season.   Remember, this is the guy who in a remarkable 2015-2016 season scored 36 goals for Napoli, an all time Serie A goalscoring record.
That performance, which came in his third season with Napoli, under the coaching of the current Chelsea manager, Maurizio Sarri, earned him a big time move to Juventus. Brought on board as the new Messiah, Higuain was top dog at Juventus for two seasons until the boy Ronaldo showed up in Turin last July.
Yet, there are reasons to believe that Higuain, after just five months at Milan, could be on the move again – if not now, then next summer. There is the possibility that, unless they qualify for the Champions League next season, Milan will not activate the €36 million dollar buy-out clause for Higuain with Juventus. Were that to happen, then he could well be tempted by a permanent move to Chelsea where the presence of coach Sarri would represent a further huge attraction for him.
[collection name=”small” accordion=”mobile” excerpt=8]
What is true is that the current Higuain seems some way removed from the player who, for the last five years, has been one of the best strikers in world football. Former AC Milan, Real Madrid and England coach, Fabio Capello, argues that Higuain’s Milan experience has been ruined by his failure to score against Juventus from the penalty spot in a Serie A clash last November at the San Siro.
With the score on 1-0 for Juventus, Higuain missed a 41st minute penalty which would have sent the two teams in at half time on 1-1. As it was, Juventus wrapped it up with a second late goal to win 2-0. Obviously, Higuain would dearly have liked to score against Juventus, both for his own “new” club but also to restore his professional pride after being painfully rejected by the Turin club. Speaking on RAI’s Radio Anch’Io programme on Monday, Capello said:
“He hasn’t got beyond that missed penalty against Juventus. Since that day, he has not been himself. I hope for Milan’s sake that he gets back to his best form again and is once again the player we all know well…His sort of tactical intelligence and his ability to strike at the key moment are talents you never lose, rather they get better.”
For Higuain’s compatriot, Mauro Icardi, a current loss of form is definitely not the problem. Nine goals in Serie A this season, not to mention a third minute penalty goal against Benevento in a 6-2 Cup win on Sunday night, are ample evidence that Icardi is, if anything, playing better than ever.
Inter clearly do not want to lose him. However, they find themselves having to confront that ugly thought as they attempt to sign a new contract with him.    Currently on an after-tax €5.3 million euro salary, Icardi has reportedly asked for a significant pay rise, perhaps as much as €9 million.
The contract re-negotiation has not proved straightforward, largely because both Icardi and his agent, wife Wanda Nara, have made it clear via the media that they are looking for a rise. Speaking to Spanish daily AS last week, Ms. Nara said:
“We are a long way from agreeing a new contract…We haven’t yet received a satisfactory offer from Inter…Then, there are a lot of big clubs which would like to sign Mauro…”
Inter, who probably have not much appreciated the public nature of this negotiation, seemed to betray a certain irritation by fining their captain €100,000 euro when he returned to Milan a day late after the post-Christmas break.
In the end, this is probably more like a lover’s tiff which will end with Inter holding on to their man, admittedly at a certain price. As for Higuain, his future in the city of Milan suddenly looks a lot less secure.
Don’t forget to follow World Soccer on Facebook and Twitter.