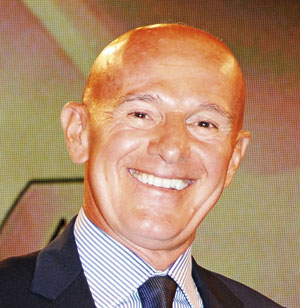 People say that, when appointed coach of Milan in 1987, you transformed the mentality of Italian football, adopting a more attacking philosophy. Do you agree?

In Italy I think the mentality did not really change. Recently I said to some friends that, if I was the one who changed Italian football, I should have left it as it was. Obviously this is a joke, but from the end of the 1980s there has not been a significant change of mentality in our country. There has been no movement to follow on from what we did with that fantastic Milan team. Looking back, I think we lost a big opportunity.

Your very early days at the San Siro were difficult. How did you survive such challenges?

It was to become a magnificent Milan team, probably unrepeatable, but I was grateful to Silvio Berlusconi because he always placed his trust in me, especially at the beginning when the first losses came. The board always supported me. Always. For example, after a loss at home against Fiorentina early in the 1987-88 season, Marco Van Basten criticised me quite severely. But the board trusted me and said follow your way, it is the right way. In the following match, at Cesena, I left Van Basten on the bench and he asked me to explain my decision. I told him: “Well Marco, since you are so good tactically, you can sit next to me on the bench and point out all my mistakes to me during the match.” I was only able to do this because everybody at Milan trusted me.

What was the secret behind the Milan team that won two European Cups in successive seasons?

There was no secret, only a great team. Silvio Berlusconi didn’t want other managers coming to Milanello to watch the training but I told him: “Mr President, it is not a problem at all. They can watch all the training sessions they like, but if they do not have the key, they cannot open the door.” And, you know, there is a big difference if La Traviata is conducted by Riccardo Muti or by my cousin. It is opera in both cases, but conducted in a very different way.

What have been the most important tactical revolutions in football?

There has been only one real tactical revolution and it happened when football shifted from an individual to a collective game. It happened with Ajax first and then the Holland national team at the beginning of the 1970s. For Johan Cruyff and the rest of the Dutch players the field suddenly became small; for the other teams, the field remained enormously big. This philosophy marked the difference between me and Silvio Berlusconi, tactically speaking. He thought that football was a beautiful game played by skilled individuals and I thought – and I still think that it is a beautiful game played by a team collectively.

You have often criticised Italian football for not having “a project”. Do you think that an Italian equivalent of Alex Ferguson is impossible in Italy?

Absolutely. I know Alex Ferguson and I think he is a great man with a lot of qualities on and off the football pitch. But in Italy not a single president is forward-looking enough or has enough patience to buy players who they can build a project around. They only buy the players they believe will get the fans excited. Recently, after the draw against Barcelona, I criticised Max Allegri and his Milan side.

I asked how it was possible for a team whose mission has always been to play spectacular football to play so defensively for 90 minutes. No, I would say that Italy
is still far behind, at least according to my way of thinking about football.

For you, who are the teams that have changed the history of football?

I have seen three great teams in my lifetime: the Ajax and Holland side of the 1970s; my Milan at the end of the 1980s; and today Barcelona with Pep Guardiola at the helm.

Guardiola is at a club with a strong tradition of Dutch coaches: Johan Cruyff first, then Louis Van Gaal and Frank Rijkaard. Has he copied the Dutch philosophy?

Their Barcelona teams played a different type of football. I played against Cruyff when he was the manager of Barcelona and they did not pay a lot of attention to the defensive aspect of the game. Guardiola’s team play a more complete style because all the players in his team can attack and defend. This is a new version of “totaalvoetbal”.

What do you believe has gone wrong with Italy’s national team?

After the Word Cup Final defeat to Brazil in 1994 I said during a FIFA conference that Milan are stronger than the Italian national team and maybe even a smaller club like Rimini are stronger than the Azzurri. International teams are overcome by clubs. Training the players every day is very different to seeing them only once in a while, mainly to play friendlies that no one actually cares about. In any case, I think that my best Italy team were in 1996 at the European Championship in England. Those players played together for four years. In the last group game against Germany we played a wonderful match and, paradoxically, we went out in the first round after a dramatic defeat by the Czech Republic. I probably made a lot of mistakes during that tournament but that team played some excellent football.