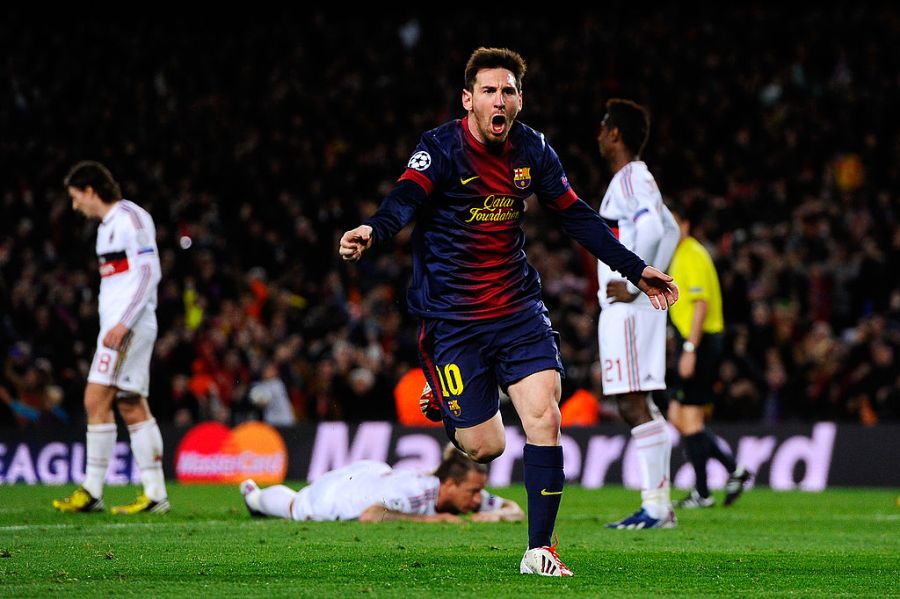 Lionel Messi: My first memories are from when I was very little, maybe three or four years old playing in my neighbourhood at home. I can picture myself with the ball at my feet from a very young age.

Did you learn to avoid the hacking and the fouling way back then?

I always had the same style of play. I didn’t really worry about people kicking me.

Looking back on your first weeks and months at Barcelona, were they happy times or bad times?

Both. I was happy to be living in Barcelona and experiencing all those new things. On the other hand, it was hard to be so far away from people. I had to start again, new team-mates, new friends. I also couldn’t play at first because of injury and because there were problems with the paperwork. That start was hard.

Who were your idols?

I always admired [Pablo] Aimar; he came from River and I followed him a lot.

Did you have problems with people because you were small?

No, I never had any problems with my height. I was always the smallest kid, at school and in my teams.

You weren’t a regular starter until the age of 13 or 14 when Tito Vilanova, your current coach at Barcelona, took over the team. Did you ever think of giving up?

No, never. I always thought about carrying on training and working, chasing my dream. I was lucky that when Tito came I began to play more often and from then on my career changed in the youth system.

Is Tito the same now as he was then?

He’s the same person who coached us in the cadets team. I was little and I don’t remember that much from that time, but he’s the same and he treats us as he did then.

Did you play the same way you do now, as a false number nine?

No, the system was different. We played with one striker and I played just behind him, with two wingers out wide. I was a mediapunta. It’s not a case of the false nine starting with that team because we didn’t play that system.

Is your playing style a result of your education at Barcelona?

My style of play has always been the same. I never tried to develop a specific style. From very young I just played this way. What is certainly true is that I learnt a lot in the youth system. The way we worked here was different. There was a lot of contact with the ball and a lot of work on the tactical system. I came from Argentina where we didn’t do anything like that. Over there it was lots of running and not much more.

You’ve been reunited with Cesc Fabregas, who you played with at youth level. Do you have a special understanding?

We understand each other very well and we know each other well. It’s easy to play with Cesc because of the style he has. We try to look for each other on the pitch and in training.

When you played for Barcelona in the first team for the first time, in the pre-season Joan Gamper Trophy, Fabio Capello described you as “a little devil”…

It was incredible to hear that he had said that. He’s a coach who has won so much and it was very nice that he should say that about me.

That was a tough moment, but fortunately it was resolved quite quickly. I wanted to play, I had the chance to make the step up to the first team and they wouldn’t let me. I didn’t understand why I couldn’t play.

Why do you think Deco and Ronaldinho took you under their wing?

I don’t know. Right from the start I was lucky enough to have them by my side. I will be grateful to them for my whole life; them and [Thiago] Motta and Sylvinho.

What happened to that team? Why did it fall apart so quickly?

Part two of our interview with Lionel Messi