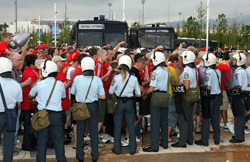 A UEFA report into the chaotic scenes before last month’s Champions League final has described Liverpool fans as the worst-behaved in Europe.

Uefa says the fans have been involved in more incidents in Europe during the past four years than any other club.

Ticketless fans caused mayhem at the final in Athens, although Liverpool placed the blame for the trouble on UEFA’s ticketing arrangements and the handling of the situation by the Greek authorities.

Uefa spokesman William Gaillard said: “That was just the latest example. What other fans steal tickets from fellow fans or from the hands of children?”

The report Uefa paints an unflattering portrait of the club’s supporters’ behaviour at the Champions League final against Milan in Athens, which the Italian side won 2-1.

Gaillard added: “We know what happened in Athens, and Liverpool fans were the cause of most of the trouble there.

“There have been 25 incidents involving Liverpool fans away from home since 2003 and these are in the report – most teams’ supporters do not cause any trouble at all.

“You must ask yourself why at the same match, with the same conditions, there was no trouble with the Milan fans – only the Liverpool fans.”

Liverpool have produced their own report into the trouble, blaming the problems on lax security measures at the final.

A club spokesman said: “The shortcomings in the management of the situation in Athens were apparent to anyone who was there.

“This latest statement from Uefa should not deflect attention from that reality.”

Thousands of supporters with forged tickets or no tickets at all managed to enter the ground, while trouble began outside the stadium when supporters with genuine tickets were turned away because the ground was already full.

Fans were already unhappy with Uefa’s ticket allocation for the Champions League final. Liverpool were allocated 17,000 tickets for the 63,800 capacity, but it is believed some 40,000 travellled to the Greek capital – many without tickets.

Liverpool chief executive Rick Parry has reacted angrily to the claim that Liverpool fans were the worst-behaved in Europe.

“The shortcomings in the management of the situation in Athens were apparent to anyone who was there and these latest comments from Uefa should not deflect attention from that reality,” Parry told the club’s official website.

“To have a stadium with no counting system and no turnstiles is unforgivable for any standard of game, let alone a major final.

“We produced a report for Uefa a week beforehand predicting, sadly, all of the things that did go wrong.

“We told Uefa our intelligence suggested there were 5,000 forged tickets in existence. They knew and we knew that thousands of fans would travel without tickets and we stressed the need for a proper check at the out cordon.”