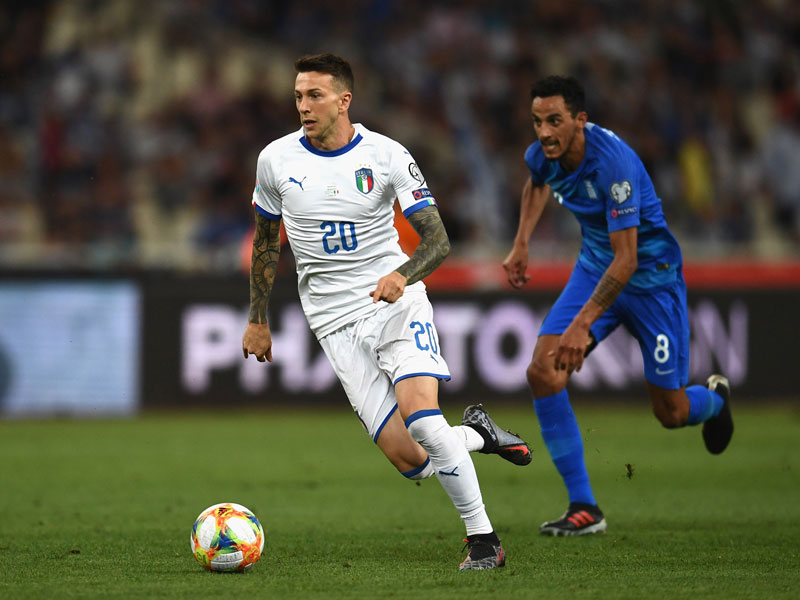 The Renaissance of the Italian national team under “maestro Mancini” goes on apace. One year after he took charge of the Azzurri, Mancini’s team gave yet another convincing performance to comfortably beat Greece 3-0 in their Euro 2020 qualifier in Athens on Saturday night, thus making it three wins from three.

Wins against Finland, Lichtenstein and now Greece are hardly transcendental moments on the path to Nirvana. Yet, given the low point from which Italy started off in the wake of that humiliating failure to qualify for last year’s World Cup in Russia, these three wins tend to look like 17 carat gold objects

In the space of one year, Mancini has made prodigious progress. He has rebuilt Italy, infusing a new enthusiasm into a side which, in his own best tradition – just think of his Inter or his Manchester City sides – goes out there to win and to play well to win.

We had thought that this Greek side might be the first serious test on the  growth path of the new look Italy. In reality, Greece were more than a tad disappointing, appearing surprisingly confused and timid whilst even the normally “hostile” Athens atmosphere seemed tame and inoffensive in an Olympic stadium that was only half full.

After half an hour, this game was over with Italy having scored three goals in ten minutes through midfielder Nicolo Barella, Lorenzo Insigne and Leonardo Bonucci. Speaking after the game, Mancini was understandably satisfied, saying:

“For me, one of the most important things that I need to understand (from this game) is why we didn’t score a fourth goal. Because (in the 2nd half) rather than keep on taking the game to them, we eased off and just controlled the game.”

Now, hand ups who can tell us the last time that an Italian coach criticised his side for failing to score a “fourth” goal. That remark says much about the Mancini mindset, one that is light years removed from a traditional, “defence, defence and then defence” method of Italian team building.

Of course, Mancini is right to say that he has a long way to go. On paper, a group comprising Greece, Finland, Bosnia, Armenia and Lichtenstein hardly looked intimidating. If there were going to be any problems along the way, you might have expected them from Greece more than from any other side.   On the basis of Saturday night’s game, however, this Greece are a long way removed from the quality of their Euro 2004 winning side.

There will be more serious tests along the way. For now, we can only remark that Mancini’s side combines solidity and quality, as best characterised by three key figures in defender Bonucci, midfielder Barella and striker Insigne.

Of Bonucci, there is nothing new to say.  He is the ideal rock on which most coaches would love to build their defence. Cagliari’s Barella continues to grow into his midfield role as the latter day Tardelli who combines cover, work rate and the ability to get forward to score. Relatively unknown outside of Italy, Barella in many senses is the perfect face of this bright new side.

Finally, Saturday night’s game marked the return of Napoli’s talented striker, Lorenzo Insigne. Remember, he was the player who featured in a memorable moment in that ill-fated World Cup qualifier against Sweden at the San Siro in November 2017.

With Italy desperate for a goal that would take them to Russia, then coach Giampiero Ventura opted to make a change, wanting to bring on midfielder Daniele De Rossi. The AS Roma man protested, pointing to Insigne sitting on the bench alongside him and appearing to indicate that “this is the guy you want to be bringing on now…”.

De Rossi’s point was obvious enough. Insigne underlined that point last Saturday night when scoring the best goal of the night, winning the ball from the left flank of the Greek defence before making ground, then cutting inside to slot home a trademark, right foot curling shot into the far right corner. It was a goal of class and quality that seems symptomatic of how Mancini wants this team to play.

The Italian adventure continues on Tuesday night against Bosnia at the Juventus Stadium in Turin in a game in which Mancini will probably present a little changed side, despite the temptation to ring the changes in a squad which, inevitably, are beginning to feel the effects of the long hard season.

One of the trio, Fabio Quagliarella, Moise Kean or Federico Bernardeschi, who all missed out against Greece, may be drafted in against Bosnia but otherwise expect the same formation… Mancini will be expecting the same result too.